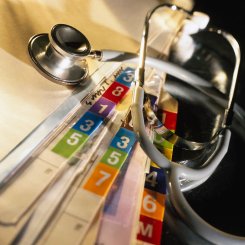 Stereotypes and misinformation about HIV that are commonplace among the general public are also evident in a surprising number of clinical staff, a study from the University at Buffalo has found. Published in the journal AIDS Patient Care and STDs, Lance S. Rintamaki's study shows that more than 25 years after its discovery, HIV still has the power to generate a broad array of stigmatizing behavior. People infected with HIV have previously labeled dealing with stigma as the most significant social and psychological challenge of the HIV experience and Rintamaki's study shows little has changed.

Stigmatizing experiences included judgmental behavior and panic on the part of providers when informed of a patient's HIV status, doctors "hermetically sealing" themselves before approaching the patient and patients being told they were going to die. Participants described being blamed openly by health-care providers for their condition. One patient told of being scolded by a phlebotomist; "If you hadn't done this to yourself, we wouldn't have to be going through this!" when he objected to being "poked" painfully several times as she searched for a viable vein to draw blood.

Other reports included the hospital worker who refused to mop the floor in an HIV patient's hospital room, the dentist who turned away a patient because of his HIV status and rough-handling by paramedics. One participant said he had so little eye contact with his neurologist that he couldn't describe the doctor's face. Another participant recounted a nurse's disdain when she delivered his AIDS diagnosis: "It was just so callous and cold the way she said it; 'You have AIDS.' There was no feeling. It's almost like a stone-faced warden or something. No concern."

"Given patients' sensitivity to any indication of bias or discrimination, it's likely that even well-intentioned health-care personnel sometimes engage in behaviors that are interpreted negatively by their patients," said Rintamaki. "The findings from this study give health-care personnel additional insights on what to avoid, or if certain protocols are standard procedure, what to explain further. These approaches might help to prevent misunderstandings."