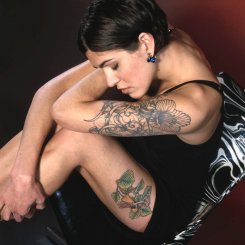 The journal Genetic Vaccines and Therapy reports that German researchers have found tattooing to be an extremely effective method for delivering DNA vaccines. "Vaccination with naked DNA has been hampered by its low efficiency," said Martin M�ller, of the German Cancer Research Center. "Delivery of DNA via tattooing could be a way for a more widespread commercial application of DNA vaccines."

M�ller explained that tattooing provokes inflammation which "primes" the immune system. Additionally, tattooing covers a bigger area of the skin than an injection, so the DNA vaccine can enter more cells. M�ller speculates that these effects may account for the stronger immune response. The researchers believe that tattooing could play a role in the routine vaccination of cattle or in delivering therapeutic vaccines to humans.