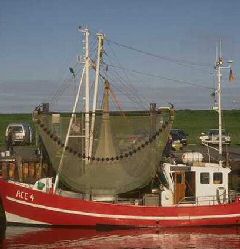 A Canadian-U.S. study, published in Nature Geoscience, has found that commercial fisheries play an unexpected role in the decline of water quality in coastal waters. Researchers Roxane Maranger and Nina Caraco suggest that the collapse of the fisheries from decades of over fishing has played a significant role in disturbing the balance between nitrogen entering and leaving coastal water systems.

The study, examining 58 of the world's coastal regions, shows how failing to maintain ecosystems in a sustainable manner has wide-ranging consequences. Using data provided by the United Nations, Maranger and Caraco found that commercial fishing has played an important, yet declining, role in removing man-made nitrogen from coastal waters.

"Fish accumulate nitrogen as biomass, and when humans move fish from the ocean to the table through commercial fisheries, they are returning part of this terrestrial nitrogen generated by humans back to the land," said Maranger, a biology professor at the Université de Montréal (Canada).

Caraco, an aquatic biogeochemist at the Cary Institue of Ecosystem Studies in New York notes: "While nitrogen is essential to plant and animal life in oceans, human export of nitrogen from land to ocean has resulted in exploding nitrogen levels in coastal waters over the past century. Nitrogen-rich fertilizer that's applied to farmland eventually makes its way into coastal waters via a network of streams and rivers. Fertilizer run-off is a significant source of nitrogen pollution to many coastal regions around the world."

Four decades ago, commercial fishing removed the equivalent of 60 percent of the nitrogen from coastal oceans that entered as fertilizers. Today, this figure has dropped to 20 percent. "This is bad news," says Maranger. "Increased nitrogen levels in coastal ocean ecosystems throughout the world have resulted in excessive plant growth, lack of oxygen, severe reductions in water quality and in fish and other animal populations."