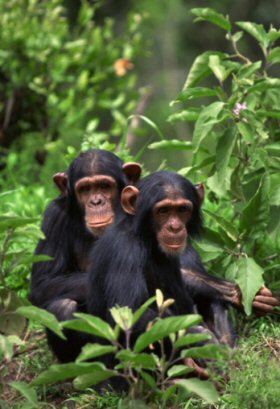 Wild chimpanzees do not routinely experience menopause, suggests a Harvard University study, rebutting previous studies of captive individuals which had postulated that female chimpanzees reach reproductive senescence at 35 to 40 years of age. Together with recent data from wild gorillas and orangutans, the finding - described in Current Biology - suggests that human females are rare or even unique among primates in experiencing a lengthy post-reproductive lifespan.

"We find no evidence that menopause is common among wild chimpanzee populations," says lead author Melissa Emery Thompson. "While some female chimpanzees do technically outlive their fertility, it's not at all uncommon for individuals in their 40s and 50s - quite elderly for wild chimpanzees - to remain reproductively active."

While wild chimpanzees and humans both experience fertility declines starting in the fourth decade of life, most other human organ systems can remain healthy and functional for many years longer, far outstripping the longevity of the reproductive system and giving many women several decades of post-reproductive life.

But in chimpanzees reproductive declines occur in tandem with overall mortality. A chimpanzee's life expectancy at birth is only 15 years, and just 7 percent of individuals live to age 40. But females who do reach such advanced ages tend to remain fertile to the end, Emery-Thompson and her colleagues found, with 47 percent giving birth once after age 40, including 12 percent observed to give birth twice after age 40.

"Fertility in chimpanzees declines at a similar pace to the decline in survival probability, whereas human reproduction nearly ceases at a time when mortality is still very low," Emory-Thompson writes. "This suggests that reproductive senescence in chimpanzees, unlike in humans, is consistent with the somatic aging process. In other words, human evolution has resulted in an extended life span without complementary extended reproduction."

The researchers posit that it may be because there hasn't been anything for natural selection to act on that reproduction hasn't kept pace with the general increase in human longevity. "However, it may be that the advantage older females gain by assisting their grandchildren outstrips any advantage they might get by reproducing themselves," notes Emory-Thompson.

Related:
Human - Chimp Differences A Matter Of Lifestyle
More Evidence Of Our Close Relationship With Chimps
Early Humans And Chimps Much More Than Just Good Friends