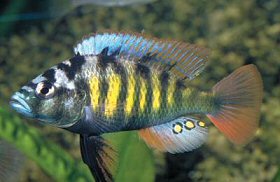 Researchers from Konstanz University in Germany have identified a gene in male cichlid fish that evolved to lure female fish into close proximity so that the male can deposit sperm in the female’s mouth. The study, in BMC Biology, reveals that the gene is responsible for egg-like markings on the fin which are central to the success of the fishes’ exotic oral mating behavior.

Attracted by what she takes to be eggs – actually the egg-dummy markings – the female then approaches the male. When the female is close enough, the male discharges his sperm into the female’s mouth to fertilize the real eggs.