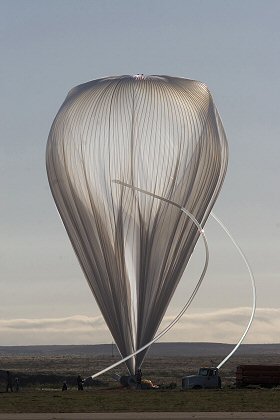 The National Center for Atmospheric Research (NCAR) this month successfully launched a solar telescope to an altitude of 120,000 feet, borne by a balloon larger than a Boeing 747 jumbo jet. The successful test clears the way for long-duration polar balloon flights in 2009 that will capture unprecedented details of the Sun's surface.

The project, known as Sunrise, may usher in a new generation of balloon-borne scientific missions that cost less than sending instruments into space. Scientists also can test an instrument on a balloon before making a commitment to launch it on a rocket.

Sunrise was launched successfully on the morning of October 3 from the Columbia Scientific Balloon Facility in Fort Sumner, New Mexico. It flew for about 10 hours, capturing stable images of the solar surface and additional data from the various instruments of the sophisticated payload. The gondola then separated from the balloon and descended with a parachute, landing safely in a field outside Dalhart, Texas.

The ultimate goal of the Sunrise project is to investigate the structure and dynamics of the Sun's magnetic fields. The fields fuel solar activity, including plasma storms that buffet Earth's outer atmosphere and affect sensitive telecommunications and power systems. The fields also cause variations in solar radiation, which may be significant factors in long-term changes in Earth's climate.

At an altitude of 120,000 feet, the telescope will rise above most of the turbulence of the atmosphere and ultraviolet-absorbing water vapor and ozone. It will be able to view stable images in the ultraviolet range, which allow for higher resolution than can be obtained from Earth's surface.

The telescope will capture features on the solar surface as small as 30 kilometers across (about 19 miles), more than double the resolution achieved by any other instrument to date. This will enable scientists to examine structures on the Sun that are believed to be key to understanding the mechanisms driving solar activity.

In addition to the telescope, the gondola on its full-scale research missions will carry a polarimetric spectrograph that will measure wavelengths in the Sun's electromagnetic spectrum and enable scientists to make inferences about its magnetic fields. Another instrument, known as an imaging magnetograph, will provide two-dimensional magnetic field maps.

"This is a very economical way of rising above the atmosphere and capturing images that cannot be captured from Earth," said Michael Knölker, director of NCAR's High Altitude Observatory and a principal investigator on the project. "What we are doing is laying the groundwork for the next generation of space flights."