You are here: Home › News › Parenting Suffers With Too Much Testosterone
By Will Parker on October 16, 2007 in News 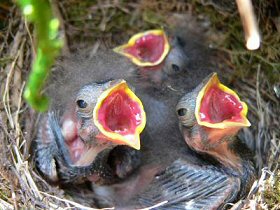 Ramping up testosterone production can help male birds win a mate, but it also turns them into bad dads, who are uninterested in parenting their young. Such are the perils of masculinity amongst dark-eyed juncos, as reported in The American Naturalist by researchers from Indiana University, the University of Virginia and the University of Southern Mississippi.

“Our data also suggest that there is more than one way to be successful at reproduction. Some males may seek mates at the expense of parental behavior, but other males are doing the opposite. They are being more parental at the expense of aggression. And apparently both ways of being in the world work,” explained Ellen Ketterson, of Indiana University.

Ketterson added that it was a classic trade-off in evolutionary biology: males have a certain amount of energy and time they can invest in attracting mates and sticking around to parent offspring. Under certain circumstances it may be beneficial for male birds to “love ’em and leave ’em,” maximizing the number of female partners during a mating season. Under other circumstances, it may be in the male junco’s best interests to mate with only one female and stick around until the chick is old enough to fend for itself.

“The results are exciting because they show us how animals that make different choices might differ from each other on a physiological level. On an evolutionary level, they suggest that there may often be more than one right choice, depending on the circumstances,” co-researcher Joel McGlothlin said.

Male juncos pose an interesting evolutionary question. Why wouldn’t one of the behaviors win out over the other? “Variation in behavior may persist because the environment varies,” Ketterson said. “In cold, wet years, or years when lots of predators are attacking young in the nest, good fathers may be more successful at leaving offspring. When food is plentiful and predators are few, males that focus on mating may be more successful. The balance between the two is probably dynamic.”

Ketterson said the next step in the program was to relate variation in testosterone to actual measures of evolutionary fitness – namely lifespan and offspring actually produced. “Is it true that individuals who resolve the trade-off in different ways have equal fitness? Can a good parent be just as successful in an evolutionary sense as a good mater?”