You are here: Home › News › Exotic Form Of Carbon Dioxide Cranks Up Greenhouse Effect On Venus
By Will Parker on October 11, 2007 in News 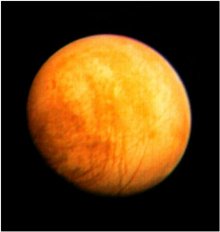 Planetary scientists have tracked down an exotic form of carbon dioxide in the atmosphere of Venus, which they believe could affect the way the greenhouse mechanism works there. The discovery was announced at the annual meeting of the American Astronomical Society’s Division of Planetary Sciences in Orlando, Florida.

Hints of the molecules presence were first noticed back in April 2006, soon after ESA’s Venus Express arrived in orbit around Venus. A European team of planetary scientists were using the Infrared Atmospheric Spectrometer (SOIR) instrument to measure solar occultations when they observed an unidentified signature at 3.3 micrometres in the mid-infrared region of the spectrum. “It was conspicuous and systematic, increasing with depth in the atmosphere during the occultation, so we knew it was real,” says team leader Jean-Loup Bertaux.

Keeping their discovery confidential, the team started work trying to identify the molecule responsible, thinking at first that it must be an organic molecule. These molecules contain carbon and hydrogen. However, none of the known organic molecules fitted well with the observations.

Then, in December 2006, Mike Mumma of NASA’s Goddard Space Flight Center, Maryland, enquired whether the SOIR team was seeing anything special on Venus at 3.3 microns. He had discovered an unidentified spectral signature at that wavelength using telescopes on Hawaii pointing at Mars. The two teams compared the absorption signatures: they were identical.

Both the atmospheres of Mars and Venus are composed of 95 percent carbon dioxide, although Venus’s atmosphere is much thicker than that of Mars. The American team suggested that the signature could be coming from an isotope of carbon dioxide, where one oxygen atom is “normal”, with eight protons and eight neutrons, while the other has eight protons and ten neutrons. Such an isotope makes up about 1 percent of carbon dioxide on Earth; the rest contains two normal oxygen atoms.

However, no one had previously seen the molecule absorb at 3.3 micrometres. An investigation by three independent groups, one led by Mumma in America; Sergei Tashkun and Valery Perevalov at Tomsk State University, Russia; and Richard Dahoo at Service d’Aéronomie du CNRS, France, all came to the same conclusion. The signature could be caused by a rare transition only possible in the isotope. The different weights of the oxygen atoms allow the molecule to alter its vibration in two ways simultaneously, whereas normal molecules can only change one state at a time. This rare transition allows it to absorb even more energy and so contribute even more to the greenhouse effect on Venus.