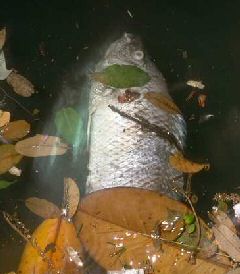 Trout raised in hatcheries suffer a dramatic and unexpectedly fast drop in their ability to reproduce in the wild, a study from Oregon State University (OSU) has found. The researchers say that important questions now need to be asked about the wisdom of historic hatchery practices.

Published in Science, the study demonstrates for the first time that the reproductive success of steelhead trout, an important salmonid species, can drop by close to 40 percent per captive-reared generation. "For fish to so quickly lose their ability to reproduce is stunning, it's just remarkable," said OSU's Michael Blouin. "We were not surprised at the type of effect but at the speed. We thought it would be more gradual. If it weren't our own data I would have difficulty believing the results."

The fish reared in a hatchery for two generations had around half the reproductive fitness of fish reared for a single generation. The effects appear to be genetic, Blouin said, and probably result from evolutionary pressures that quickly select for characteristics that are favored in the safe, placid world of the hatchery, but not in the comparatively hostile natural environment.

"Among other things, this study proves with no doubt that wild fish and hatchery fish are not the same, despite their appearances," said Blouin. "Some have suggested that hatchery and wild fish are equivalent, but these data really put the final nail in the coffin of that argument." Even a few generations of domestication may have significant negative effects, and repeated use of captive-reared parents to supplement wild populations "should be carefully reconsidered," the study noted.

"The problem is in the second and subsequent generations," Blouin said. "There is now no question that using fish of hatchery ancestry to produce more hatchery fish quickly results in stocks that perform poorly in nature."

Blouin noted that evolution can rapidly select for fish of certain types. About 10,000 eggs can eventually turn into fewer than 100 adults and these are genetically selected for whatever characteristics favored their survival. Offspring that inherit traits favored in hatchery fish can be at a serious disadvantage in the wild where they face risks such as an uncertain food supply and many predators eager to eat them.

Blouin cautioned that these data should not be used as an indictment of all hatchery programs. "Hatcheries can have a place in fisheries management," he said. "The key issue is how to minimize their impacts on wild populations."