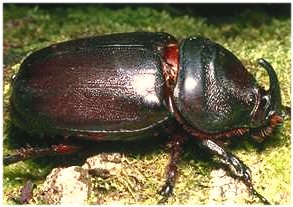 Published in Animal Behaviour, the study examined the behaviour of the beetle Callosobruchus maculates, a serious pest in warm climates. Some females were given unlimited access to water while others were not and all the females were free to mate. The researchers found that thirsty females mated 40 percent more frequently than those with free access to water.

The University of Exeter's Dr Martin Edvardsson explained that the female beetles can absorb the water in the seminal fluid through their reproductive tracts and need to mate less frequently the more water they take from each mating. This is to a male's advantage, says Edvardsson, because the longer the female goes without mating with another male, the greater his chance of successful fertilization. By transferring a large amount of water with the sperm, a male can help ensure his sperm has more time to fertilize the eggs without having to compete with the sperm from future matings.

"The large ejaculates may have evolved because males can make it less beneficial for females to re-mate by providing them with a large amount of water," speculated Edvardsson. Because there are always costs as well as benefits associated with mating, similar trade-offs are likely to be important in many species where males provide their mates with material resources. "The key thing," says Dr Edvardsson, "is that the resource provided by males is less beneficial to females the more of it they already have, like water or food for example."