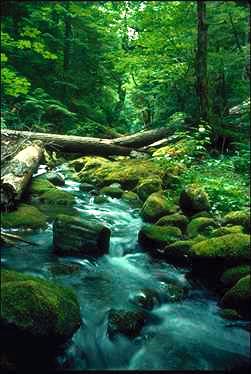 How much excess nitrogen - from fertilizers, animal waste, sewer lines, and highways - reaches waterways appears to be heavily influenced by the width of the vegetated borders around the stream. A new study from the EPA has found that borders of at least 50 meters are required for optimal removal of the human-produced nitrogen byproducts that can contaminate waterways.

The researchers collected data on various buffers along with nitrogen concentration in streams and groundwater to identify trends between nitrogen removal and buffer width, water flow path and vegetation. They found wide buffers (greater than 50 meters) removed more nitrogen than narrow buffers (0-25 meters).

Writing in the Journal of Environmental Quality, the researchers explained that different vegetation types may be an important factor in certain landscapes and hydrologic settings where forested buffers may prevent nitrogen in deep groundwater or contribute more organic carbon in streams. Riparian buffers of herbaceous vegetation or a mix with forest vegetation were found to be effective only when wider.

The study also noted that riparian services provide numerous ecosystem services beyond nitrogen removal, and although buffer width, dimension, and vegetation type provide benefits such as stream shading and water temperature maintenance, fish and wildlife habitat, or sediment control; there may be other buffer characteristics more favorable in removing nitrogen. The researchers caution, however, that watershed nutrient management efforts also must include control and reduction of specific and general sources of nitrogen from atmospheric, land, and water inputs.