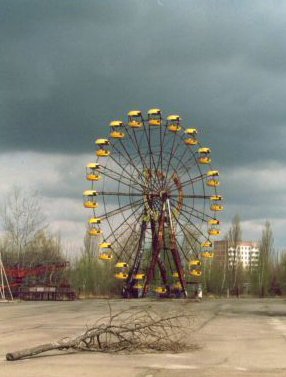 The researchers, Dr Anders M�ller of the Université Pierre et Marie Curie and Professor Timothy Mousseau of the University of South Carolina, examined 1,570 birds from 57 different species in the forests around Chernobyl at varying distances from the reactor. They found that certain characteristics played a large role in how affected the birds were by the radiation. The characteristics identified were: birds whose red, yellow and orange plumage is based on carotenoids, those birds that laid the biggest eggs, and those that migrated or dispersed the furthest.

Intriguingly, M�ller says the results point to the role of antioxidants in helping protect living organisms from the damaging effects of free radicals. Certain activities use up large amounts of antioxidants. These include producing carotenoid-based pigments for feathers, migrating long distances and laying large eggs. M�ller and Mousseau believe that because they had fewer antioxidants left to mop-up dangerous free radicals, these birds would most adversely affected by exposure to radiation around Chernobyl.

"We found that bird species differed in their response to radiation from Chernobyl. The strongest declines in population density with radiation level were found for species with carotenoid-based plumage, long-distance migration and dispersal, and large eggs for their body size. All four of these factors are associated with antioxidant levels, suggesting that reduced antioxidant levels may cause population declines when species are exposed to radiation," the researchers note.

The study found that orioles, blackbirds and blue tits were the most affected, while drab species like tree pipits, coal tits and chaffinches were much less affected. "This is the first study linking the effects of radiation on population size of different species to antioxidant defense. Although all species must cope with the potentially detrimental effects of free radicals, because of their use of antioxidants, certain species are predisposed to suffer most from these negative effects," said Mousseau. Interestingly, the researchers say that the results could help predict biological consequences in areas where there are large variations in natural levels of radioactivity; mountainous regions, for example.