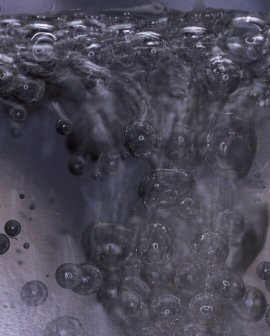 Two scientists from the University of California - San Francisco have developed a model that they believe could explain how very simple chemical and physical processes laid the foundation for life and natural selection. The model, which is based on simple, well-known chemical and physical laws, is described in the The Proceedings of the National Academy of Sciences.

Their idea is that simple principles of chemical interactions allow for a rudimentary kind of natural selection to emerge. Central to their theory is that enzymes can cooperate and compete with each other in simple ways, leading to arrangements that can become stable, or "locked in."

The model focuses on enzymes that function as catalysts. The first primitive catalysts on Earth may have been nothing more complicated than the surfaces of clays or other minerals. The model shows how two catalysts in a solution, A and B, each acting to catalyze a different reaction, could end up forming what the scientists call a complex, AB.

For example: Catalyst A produces a chemical that catalyst B uses. Since B normally "seeks out" this chemical, sometimes B will be attracted to A - if its desired chemical is not otherwise available nearby. As a result, A and B will come into proximity, forming a complex.

The word "complex" is key because it shows how simple chemical interactions, with few players, and following basic chemical laws, can lead to a novel combination of molecules of greater complexity. The emergence of complexity - whether in social systems or the evolution of life - has long been a major puzzle, particularly in efforts to determine how life emerged.

Study author, Ken Dill, calls the chemical interactions "stochastic innovation" - suggesting that it involves both random (stochastic) interactions and the emergence of novel arrangements. He compares this chemical process of "search, selection, and memory" to another well-studied process: different rates of neuron firing in the brain leading to new connections between neurons and ultimately to the mature wiring pattern of the brain. Dill also contends that Darwin's principles of evolution are evident in the chemical interactions; as they involve competition, cooperation, innovation and a preference for consistency.