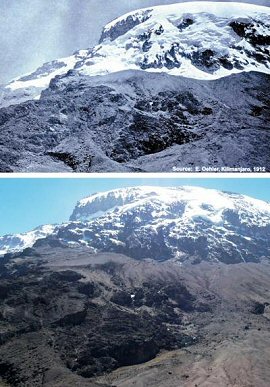 The dwindling icecap of Tanzania's Mount Kilimanjaro (pictured) has assumed something like iconic status for those seeking to dramatically illustrate the supposed effects of human-induced global warming. But an article penned by two researchers in the current edition of American Scientist asserts that global warming has nothing to do with the decline of Kilimanjaro's icecap.

Mote, and Austrian glaciologist Georg Kaser, say that the decline in Kilimanjaro's ice has been going on for more than a century and that most of it occurred before 1953, while evidence of atmospheric warming there before 1970 is inconclusive.

Kilimanjaro's shrinking icecap was featured in the Academy Award-winning documentary An Inconvenient Truth, but the researchers say that linking it to global warming is simply inaccurate.

Instead of a warming atmosphere, they attribute the ice decline primarily to complex interacting factors, including the vertical shape of the ice's edge, which allows it to shrink but not expand; and decreased snowfall, which reduces ice buildup and determines how much energy the ice absorbs.

Since the air near Kilimanjaro's summit is almost always well below freezing, there is typically no melting because of air temperature. Rather, the researchers claim, the ice loss on Kilimanjaro is driven strictly by solar radiation through a process called sublimation. Sublimation occurs at below-freezing temperatures and converts ice directly to water vapor without going through the liquid phase. "The decline is most likely associated with processes dominated by sublimation and with an energy balance dominated by solar radiation, rather than by a warmer troposphere," the scientists write.

Additionally, they speculate that fluctuating weather patterns in the Indian Ocean could also affect the shifting balance between the ice's increase, which might have occurred for decades before the first explorers reached Kilimanjaro's summit in 1889, and the shrinking that has been going on since.