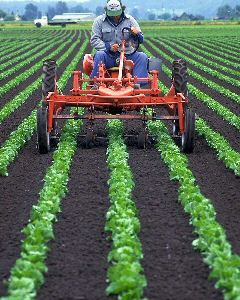 Australian agricultural researchers are excited about what they believe could be a win-win method to enrich Australia's depleted soils and at the same time lock up excess carbon to minimize greenhouse gases.

Trials of agrichar - a black carbon byproduct of a process called pyrolysis, which involves heating green waste or other biomass without oxygen to generate renewable energy - have doubled and, in one case, tripled crop growth when applied at the rate of 10 metric tons per hectare. The researchers have compared the agrichar enhanced soil to the highly fertile Amazonian dark earths known as terra preta.

Created by pre-Columbian populations thousands of years ago through the addition of charred organic matter, South American terra preta continues to be staggeringly productive despite being intensively cultivated.

The technique used in Australia takes organic matter or biomass, including green or feedlot wastes, and converts them to char during pyrolysis, a thermo-chemical process conducted in the absence of oxygen. The bulk of the feed material is converted during pyrolysis into a high-carbon char material which is far more stable than the original biomass, effectively sequestering the carbon and removing it from the greenhouse cycle.

Scientist Lukas Van Zwieten, from the New South Wales Department of Primary Industry, said soils naturally turn over about 10 times more greenhouse gas on a global scale than the burning of fossil fuels. "So it is not surprising there is so much interest in a technology to create clean energy that also locks up carbon in the soil for the long term and lifts agricultural production," he said.

While the Australian trials of agrichar showed significantly lower emissions of carbon dioxide and nitrous oxide (a greenhouse gas more than 300 times as potent as carbon dioxide) from the soil, the scientists were chiefly focused on the benefits to agricultural productivity rather than it's carbon sequestering capabilities. "When applied at 10 metric tons/hectare, the biomass of wheat was tripled and of soybeans was more than doubled," noted Van Zwieten. "This percentage increase remained the same when applications of nitrogen fertilizer were added to both the agrichar and the control plots. For the wheat, agrichar alone was about as beneficial for yields as using nitrogen fertilizer only. And that is without considering the other benefits of agrichar."

Van Zwieten explained that agrichar raised soil pH at about one-third the rate of lime, lifted calcium levels and reduced aluminum toxicity on the red ferrosol soils of the trial. "Soil biology improved, the need for added fertilizer reduced and water holding capacity was raised," he said.

The current trials are being run from a small pilot plant which means supplies of agrichar are limited, but the researchers hope that the positive results will prompt a rethink about how biomass waste is processed. "We are hoping the technology will take hold and pyrolysis plants will be built where there is a steady stream of green or other biomass waste providing clean energy that is carbon negative," Van Zwieten concluded.