You are here: Home › News › Tantalizing Hint Of Room-Temperature Superconductor
By Will Parker on May 31, 2007 in News 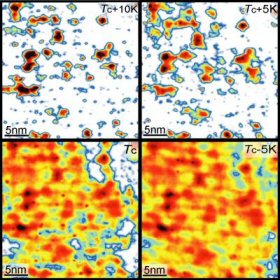 Tiny, isolated patches of superconductivity exist within certain ceramics at higher temperatures than previously thought possible, according to a report by Princeton scientists in Nature. The researchers say their findings were made possible by new techniques to image superconducting behavior at the nanoscale, producing “maps” of superconductivity in various materials.

Room-temperature superconductivity could revolutionize power transmission and open up a whole plethora of “green” options for energy transfer and storage. Unfortunately, researchers have not been able to move beyond the “high-temperature” ceramic superconductors discovered two decades ago that must be cooled to more than minus 100 degrees Celsius. Now, however, thanks to a special customized microscope, superconductivity temperatures may start to move upward.

(Image above shows red areas indicating the presence of superconducting pairs. Even at 10 degrees Celsius above Tc, the temperature at which the entire sample exhibits superconductivity, the electron pairs still exist in localized regions).

While the regions are tiny – only a few nanometers wide – they appear in some materials at up to 50 degrees above the critical temperature. Researcher Ali Yazdani said that understanding why these minuscule patches of superconductivity exist at higher temperatures – and how to create a material that exhibits the property everywhere – may be the key to enhancing superconductivity.

“Our measurements show that Cooper pairs survive in local patches of the material at temperatures far above the critical temperature,” said Yazdani. “Within these tiny regions, there are particular arrangements of atoms that favor formation of electron pairs at very high temperatures.”

The research team says that electron pairing is a function of highly localized chemistry in the sample, often in patches only a few atoms wide. “If we can figure out the details of what is happening at these local patches within the samples, it might be possible to construct a material that performs better overall,” said Yazdani.