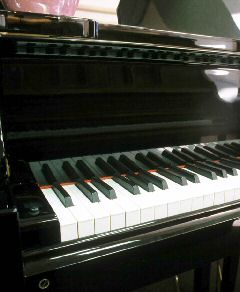 "We assigned a chord to each amino acid," explained Rie Takahashi, a UCLA research assistant and classically trained piano player. "We want to see if we can hear patterns within the music, as opposed to looking at the letters of an amino acid or protein sequence. We can listen to a protein, as opposed to just looking at it."

Proteins are composed of linear sequences of 20 different amino acids, so Takahashi initially assigned one note for each amino acid, but the 20-note scale proved too large. "You need a reduced scale, so we paired similar amino acids together and used chords and chord variations for each amino acid. We used each component of the music to indicate a specific characteristic of the protein. We are faithful in the conversion from the sequence to the music. The rhythm is dictated by the protein sequence."

Writing about her work in Genome Biology, Takahashi acknowledged that she was not the first scientist to attempt to convert protein sequences into music, but she believes her music is more melodic and less discordant than previous attempts. In Takahashi's conversion, individual amino acids are expressed as chords, and similar amino acids are paired. For example, the amino acids tyrosine and phenylalanine are both assigned a G major chord, but they can be distinguished because the notes in the chord are arranged differently.

"Some of Rie's compositions sound Chopinesque," mused co-researcher Jeffrey H. Miller, who is encouraging her to make a CD of her protein compositions. The researchers have made their music generating program available on the web for anyone to use, as well as audio samples of their own work.