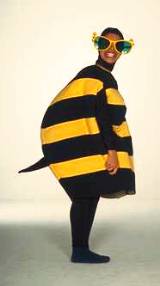 A small study from Landau University in Germany suggests that the navigational capabilities of honeybees may be adversely affected by radiation from GSM cell phones. The findings could provide an answer to the mystery of disappearing bee colonies across the Western world.

The cell phone study, conducted by Landau's Jochen Kuhn, was originally presented at a German Informatics and Cybernetics conference back in 2003. It focused on the effects of cell phone radiation on the neurological mechanisms that control learning and memory. Placing handsets near hives, Kuhn observed that GSM cell phone radiation in the frequency range 900 MHz - 1800 MHz caused the bees to avoid the hive. Kuhn speculates that the "waggle" dance that bees perform on the honeycomb to communicate with others could be influenced by the radiation.

Not all scientists agree that the dance is the primary means of communication between bees, but past studies have shown that it can fundamentally affect bee movement patterns. Kuhn suggests that the 200 - 300 cycles/second oscillations that dancing bees produce through honeycomb may be interrupted by a resonance effect caused by the telephone handsets.

First observed in the United States, the phenomenon of disappearing hive populations - known as colony collapse disorder - has now spread to Europe and Britain. The disorder causes bees to desert hives en masse, leaving only immature bees and queens. What happens to the errant bees is a mystery, but scientists speculate that they die while wandering far from their home hive. The disorder, now affecting two-thirds of American hives, is causing increasing alarm because of the critical role bees play in pollination.