You are here: Home › News › Astrophysicists Ponder Giant Cosmic Hiccup
By Will Parker on April 9, 2007 in News 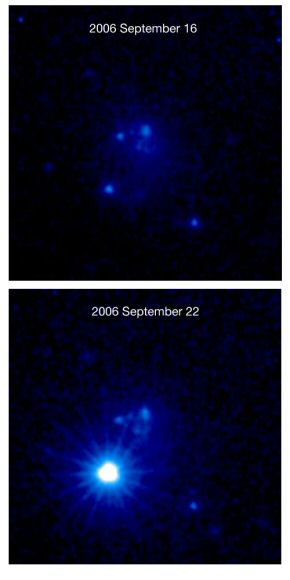 The Westerlund 1 magnetar in the Ara constellation, about 15,000 light-years away, has been observed spewing out X-rays in a kind of massive cosmic belch. What caused the event has astrophysicists scratching their heads, and is likely to be added to the already lengthy list of weird magnetar behaviors.

Like neutron stars, magnetars are the shrunken and enormously dense remnants of stars. But they also have an incredibly strong magnetic field – hundreds of trillions of times more powerful than the Earth’s.

In September of last year, the European Space Agency’s X-ray satellite, XMM-Newton, and NASA’s Swift X-ray observatory, managed to catch a glimpse of Westerlund 1 undergoing what astrophysicists believe was a major seismic event. Their report, in theAstrophysical Journal and Monthly Notices of the Royal Astronomical Society, details how the event increased the magnetar’s brightness 100 times, created three separate X-ray beams where previously only one had existed, and sped up its rotation rate by about a thousandth of a second.

Michael Muno, from the California Institute of Technology’s Space Radiation Laboratory, and the original discoverer of Westerlund 1, said the event could tell us a lot about the stresses these bizarre stellar objects undergo. He speculates that the magnetic fields inside the star are probably “wound up” like a spring, and as the magnetic fields unwind, they put stress on the outer crust of the star. The crust would resist these stresses for a while, but would eventually fracture, producing a seismic event. The fractures would cause the magnetar’s surface to shine brightly from multiple sources.

“We think the crust cracked,” Muno says, adding that the observations are important for two reasons. “First, we have now seen another way in which these exotic objects dissipate their internal fields as they age. Second, this event was only spotted because a team of us were concentrating hard on this newly discovered object. The fact that we saw the event only a year after we discovered the magnetar implies that dozens more could be lurking in our galaxy.”