You are here: Home › News › Sex Optional For Evolutionary Adaptation
By Will Parker on March 20, 2007 in News 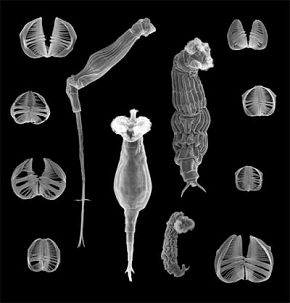 The pond-dwelling microscopic invertebrates known as bdelloid rotifers gave up on sexual reproduction more than 40 million years ago but have nevertheless managed to evolve into around 400 distinct species, say researchers inPLoS Biology. The new study challenges the notion that species diversification requires sexual reproduction, as asexual bdelloids display evolutionary patterns similar to those seen in sexually reproducing organisms.

Using DNA sequencing and bdelloid jaw measurements taken using a scanning electron microscope, researchers Tim Barraclough and Diego Fontaneto examined a selection of the little critters from across Europe and other parts of the world. They found strong evidence that the rotifers had evolved into distinct species by adapting to differences in their environment.

“We found evidence that different populations of these creatures have diverged into distinct species, not just because they become isolated in different places, but because of the differing selection pressures in different environments. One remarkable example is of two species living in close proximity on the body of another animal, a water louse. One lives around its legs, the other on its chest, yet they have diverged in body size and jaw shape to occupy these distinct ecological niches. Our results show that, over millions of years, natural selection has caused divergence into distinct entities equivalent to the species found in sexual organisms,” explained Barraclough.

Sexual reproduction was previously thought to be necessary for speciation, and significant differences in bdelloid rotifers were explained as arising solely through the chance build-up of random mutations that occur in the cloning process when a new rotifer is born. The new study, however, shows that these differences are not random, and are in fact the result of so-called “divergent selection.”

Asexual reproduction was traditionally regarded by biologists as evolutionary suicide, so the new findings should prompt a reappraisal of our understanding of speciation. “[Their] very existence calls into question scientific understanding, because it is generally thought that asexual creatures die out quickly, but these have been around for millions of years. Their ability to survive and adapt to change certainly raises interesting questions about our understanding of evolutionary processes,” noted Barraclough.