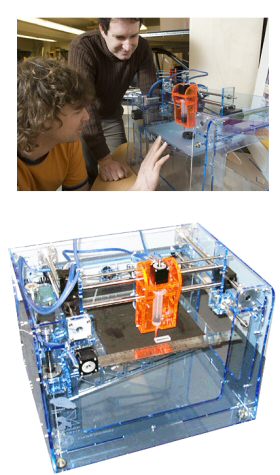 Although the Fab@Home is slower than commercial models and its resolution is lower, researchers around the world have expressed a great deal of interest in the system. Lipson says that so far, about a dozen people have started building one, and he knows of three that are actually up and running - two at the University of Washington and one in Austria. Anyone can download free plans for the machine from the Fab@Home website. The site also includes construction hints, ideas for applications, notes on the history of 3-D printing and discussion groups.

Undoubtedly, the main attraction of the system is that it is open source, meaning that anyone can enhance and improve the system for the benefit of all users. This is in stark contrast to commercial machines which can't be modified, which, Lipson says, impedes the progress of fabbing.

Because it's still early days for the technology, the kinds of objects being reproduced are non-complex. Lego parts, watchbands and containers are some of the demonstration items shown on the website. But Lipson says that the open source nature of the project will ensure diverse and surprising applications will emerge. He cites how biologists are using the machine to deposit slime mold cells in various arrangements to see how the distribution influences their ability to form colony organisms.

To date, the researchers have built a machine that uses a rack of interchangeable cartridges to make devices out of several materials at once. So far, it has made a working battery, complete with outer case. Malone's long-range goal is to "print" a complete robot, including limbs, actuators, control circuitry and batteries.