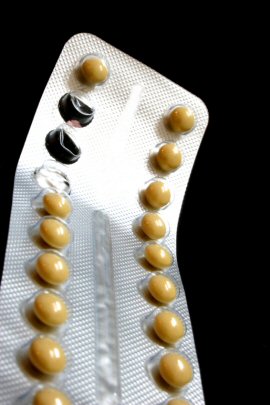 Forty years ago, when birth control pills first hit the market, the recommended cycle was three weeks of active contraceptive pills followed by one week of placebos or no pills. But now, many gynecologists believe that the week without contraception - during which a woman experiences a "withdrawal bleed" that mimics the normal menstrual cycle - isn't necessary.

While there are still widespread concerns about the side-effects from hormonal birth control, many women are suppressing menstruation using new formulation pills that result in four periods a year, while others take normal birth control pills without the week of placebos or no pills.

Susan Ernst, chief of gynecology services for the University Health Service at the University of Michigan, suggests that suppressing the menstrual cycle completely is not very different from using the three-weeks-on, one-week-off cycle. "When a woman chooses to use hormonal contraceptives, she's giving her body estrogen and progesterone, and that suppresses her own hormonal fluctuations," Ernst says. "So she's already controlling her cycle by taking those hormonal contraceptives and can further control her cycle by eliminating the pill-free interval or placebo pills."

A recent survey by the Association of Reproductive Health Professionals found that 71 percent of women surveyed do not enjoy getting their period each month. But critics contend that too much remains unknown about the effects of menstrual suppression. Some say it prevents women from ridding their bodies of excess iron; that it is unnatural to suppress one's cycle; and that more needs to be known about the effects on women's bone health, heart health and cancer risks.

But Ernst says that the practice of physicians prescribing contraceptives to stop women's menstrual cycles is not new. "Gynecologists have been doing this for years," she says, "using hormonal contraception for treating women with painful, heavy or irregular periods, or painful premenstrual symptoms." Menstrual suppression has also been used among women with endometriosis, a painful condition in which tissue that normally lines the inside of the uterus grows outside of the uterus.

Ernst cautioned that there are risks related to hormonal contraception, including blood clots, hypertension, stroke and heart attack, especially among women who smoke. "A woman has to take those risks into account when thinking about using hormonal contraception for menstrual suppression," Ernst said. "Women should discuss the risks and benefits with their doctors before deciding to suppress their menstrual cycles."