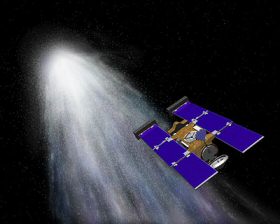 Scientists studying the first solid comet samples ever retrieved from space have just announced some preliminary findings concerning the make-up of the comet dust, reporting that it contains some of the most primitive and exotic chemical structures ever studied in a laboratory. Since NASA's Stardust mission returned to Earth in the Utah desert some eleven months ago, nearly 200 scientists from around the globe have studied the minuscule grains, looking for clues to the physical and chemical history of our solar system.

The researchers' efforts to-date have focused on answering questions regarding the nature of the comet samples, including determining mineral structures, chemical composition, and the chemistry of the organic, or carbon-containing, compounds they carry.

It is believed that comets formed long ago in the cool outer reaches of the solar system, and thus largely consist of material that formed at cold temperatures and escaped alteration in the blistering heat of the inner solar nebula (the cloud of hot gases that condensed to form the Sun and terrestrial planets around 4.5 billion years ago). The analysis conducted so far reveals that hypothesis is about 90 percent right. Evidence from the ratios of certain isotopes suggests that as much as 10 percent of the comet's material formed in the hot inner solar nebula and was transported to the cold outer reaches where the comet came together as the Sun formed. Chief among these tell-tale isotopes are those of oxygen, for which the ratios resemble those seen in meteorites known to have formed in the inner solar system.

Intriguingly though, isotopic measurements of hydrogen and nitrogen in the dust tell a different story. "The presence of excesses of heavier isotopes - deuterium and nitrogen 15, to be specific - is a strong indication that some of the comet dust was around before the Sun formed," said Carnegie Institution researcher Larry Nittler. "It's really quite striking."

The comet's organic molecules tell a similar tale. "This comet's organic material is really quite unusual compared to other extraterrestrial sources we have studied, such as meteorites and interstellar dust particles," said Carnegie's George Cody. "Yet there are some important similarities that tell that us we are not dealing with matter that is totally foreign to our solar system."

The results from the dust samples, reported in Science, note that they contain very few of the stable ringed, or aromatic, carbon structures that are common on Earth and in meteorites. Rather, they have many fragile carbon structures that would most likely not have survived the harsh conditions in the solar nebula. These molecules also contain considerably more oxygen and nitrogen than even the most primordial examples retrieved from meteorites and exist in forms that are new to meteorite studies.

"These forms of carbon don't look like what we find in meteorites, which is something like compacted soot from your chimney. The carbon compounds from this comet are a much more complicated mix of compounds," commented Carnegie's Marc Fries. "It will be an exciting challenge to explain how these compounds formed and wound up in the comet."

How those molecular structures endured collection by Stardust at a velocity of 6km/sec is another of the questions the team hopes to answer. "Every question we answer raises several more questions," Nittler noted. "But that is precisely what makes exploration so exciting and makes sample return so important."