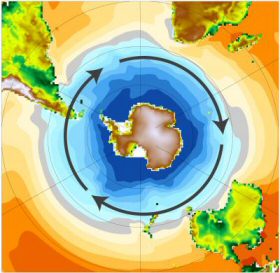 Lead researcher, Joellen L. Russell, stressed that the effect won't reverse or stop global warming, but will slow it. She noted that previous models of the Southern Hemisphere westerlies and Southern Ocean circulation did not have the winds properly located. In simulations of present-day climate, those models distorted the ocean's response to future increases in greenhouse gases.

The new model does a better job of depicting the location and observed southward shift of the Southern Hemisphere atmospheric winds than do the previous models. Developed at the National Oceanic and Atmospheric Administration's Geophysical Fluid Dynamics Laboratory, it shows that the poleward shift of the westerlies intensifies the strength of the winds as they whip past the tip of South America and circumnavigate Antarctica.

"It's like a huge blender," Russell explained. "Those winds propel the Antarctic Circumpolar Current. The current drives the upwelling of cold water from more than two miles deep. The heavy, cold water comes to the surface and then sinks back down, carrying the carbon dioxide and heat with it."

The poleward intensification of the westerlies will allow the ocean to remove additional heat and anthropogenic carbon dioxide from the atmosphere. "Because these winds have moved poleward, the Southern Ocean around Antarctica is likely to take up 20 percent more carbon dioxide than in a model where the winds are poorly located," said Russell, an assistant professor of geosciences at The University of Arizona in Tucson. "More heat stored in the ocean means less heat stored in the atmosphere. That's also true for carbon dioxide, the major greenhouse gas."

While a slowing of the planet's warming is welcome news, there is widespread concern at what effect raised CO2 levels will have on marine ecosystems. Adding more CO2 to the oceans will change their chemistry, making the water more acidic and less habitable for some marine organisms. As a next step, the team hopes to contribute to figuring out how warming, ice-melt and ongoing shifts in the Southern Hemisphere westerlies will affect the complex biogeochemistry of the Southern Ocean.