You are here: Home › News › Early Biosphere Productivity Boosted By Cosmic Rays
By Will Parker on November 15, 2006 in News 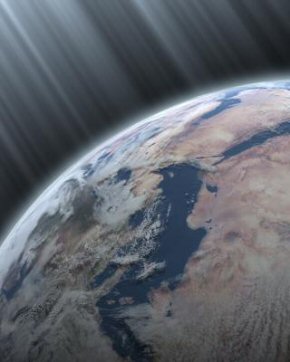 A frenetic period of star-making in the Milky Way about two-and-a-half billion years ago had extraordinary effects on life on Earth, says Dr. Henrik Svensmark, of the Danish National Space Center. Writing in the journalAstronomische Nachrichten, Dr. Svensmark reports how bacterial populations in the sea flunctuated wildly, with an instability unique to that period. Based on fossil evidence, he believes that the variability in the productivity of life on Earth is intimately linked to cosmic ray levels. “The odds are 10,000-to-1 against this unexpected link between cosmic rays and the variable state of the biosphere being just a coincidence, and it offers a new perspective on the connection between the evolution of the Milky Way and the entire history of life over the last 4 billion years,” he said.

Dr. Svensmark arrived at his hypothesis by looking at counts of heavy carbon atoms (carbon-13) in sedimentary rocks. When bacteria and algae in the ocean grow by taking in carbon dioxide, they prefer the ordinary carbon-12 atoms. As a result, the sea becomes enriched in carbon-13, which is used by larger creatures to build carbonate shells. Variations in carbon-13 therefore record how much photosynthetic growth was in progress when the shell-makers were alive – in other words, how productive the biosphere was at that time.

Dr. Svensmark said this reveals a link more subtle than any straightforward idea of, say, a warm climate being life-friendly or a cold climate deadly. The record shows that in all icy epochs the biosphere kept lurching between exceptionally low and exceptionally high productivity. Dr. Svensmark speculates that the variations in cosmic radiation affected biological productivity through their influence on cloud formation, which would have a cooling effect on the surface temperature of Earth.