You are here: Home › News › Cassini Spots Pseudo-Hurricane On Saturn
By Will Parker on November 10, 2006 in News 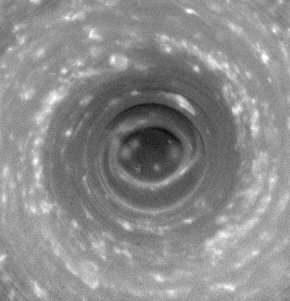 The Cassini spacecraft has seen something never before seen on another planet – a hurricane-like storm with a well-developed eye ringed by towering clouds at Saturn’s south pole. The pseudo-hurricane, about 5,000 miles across, spans a dark area inside a thick, brighter ring of clouds. The storm is locked to the pole and does not drift around as Earth’s storms do.

“It looks like a hurricane, but it doesn’t behave like a hurricane,” said Dr. Andrew Ingersoll, a member of Cassini’s imaging team. “Whatever it is, we’re going to focus on the eye of this storm and find out why it’s there.” A movietaken by Cassini’s camera over a three-hour period reveals winds around Saturn’s south pole blowing clockwise at 350 miles per hour.

The camera also captured the shadow cast by a ring of towering clouds surrounding the pole, and two spiral arms of clouds extending from the central ring. These ring clouds are two to five times taller than the clouds of thunderstorms and hurricanes on Earth.

Eye-wall clouds are a distinguishing feature of hurricanes on Earth, forming where moist air flows inward across the ocean’s surface, rising vertically and releasing a heavy rain around an interior circle of descending air that is the eye of the storm itself. Ingersoll thinks it unlikely that such moist convection is driving Saturn’s storm, but the dark “eye” at the pole, the eye-wall clouds and the spiral arms together do indicate a hurricane-like system. To date, storms observed on other planets, such as Jupiter’s Great Red Spot, have no eye or eye-wall.

Cassini will continue taking images as the south pole season changes from summer to fall, hopefully yielding insights into the role the seasons play in driving the dramatic meteorology at the south pole.