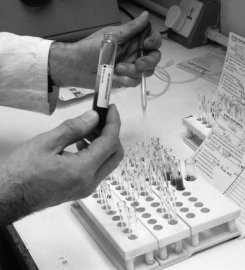 A new gene therapy based on a disabled AIDS virus carrying genetic material that inhibits HIV replication has produced positive results in a Phase I clinical trial, say researchers at the University of Pennsylvania School of Medicine. Reporting in the Proceedings of the National Academy of Sciences, Penn researcher Carl June said that viral loads in the five patients recruited for the study remained stable or decreased, and T-cell counts remained steady or increased in four of the patients during the nine-month trial. Additionally, in four patients, immune function specific to HIV improved.

"The new vector is a lab-modified HIV that has been disabled to allow it to function as a Trojan horse, carrying a gene that prevents new infectious HIV from being produced," said researcher Bruce Levine. "Essentially, the vector puts a wrench in the HIV replication process." The modified AIDS virus is added to immune cells that have been removed from the patient, purified and genetically modified. The modified immune cells are then returned to the patients' body by simple intravenous infusion.

The end result is that the patients' own T cells, which are targets for HIV, can inhibit HIV replication - via the disabled HIV vector and its anti-viral cargo. Inhibition occurs when the HIV vector delivers an antisense RNA molecule that is the mirror image of a HIV gene called envelope to the T cells. When the modified T cells are given back to the patient, the antisense gene is permanently integrated into the cellular DNA. When the virus starts to replicate inside the host cell, the antisense gene prevents translation of the full-length HIV envelope gene, thereby shutting down HIV replication by preventing it from making essential building blocks for progeny virus.

"We were able to detect the gene-modified cells for months, and in one or two patients, a year or more later," said Levine. "These cells just don't die inside the patient. The really interesting part of the study came when we saw a significant decrease in viral load in two patients, and in one patient, a very dramatic decrease." But, he cautions, "just because this has produced encouraging results in one or two patients doesn't mean it will work for everyone. We have much more work to do."

The research team is now recruiting for a second trial with HIV patients whose virus is well controlled by existing anti-retroviral drugs. The new trial will use six infusions rather than one and is designed to evaluate the safety of multiple infusions and to test the effect of infusions on the patients' ability to control HIV after removal of their anti-retroviral drugs.