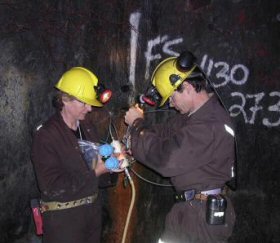 Astrobiologists have welcomed the discovery of uranium-cooking bacteria that live two miles under the Earth's surface. Such exotic and hardy organisms indicate that life might exist in subsurface environments on all sorts of planets that were previously considered inhospitable.

Details of the find were reported by researchers from Indiana University Bloomington (IUB) and eight collaborating institutions in this week's Science magazine. Reading like an excerpt from an Indiana Jones screenplay, the researchers describe how they descended into the hot, gas-choked shafts inside a South African gold mine to study a new water-filled fracture in subsurface rock that they believed was uncontaminated by human activities.

Samples from the flowing fracture water were taken over 54 days to determine whether the community of microbes, if present, changed in composition and character, and to determine whether contamination had occurred. "We know surprisingly little about the origin, evolution and limits for life on Earth," said IUB biogeochemist Lisa Pratt.

"Scientists are just beginning to study the diverse organisms living in the deepest parts of the ocean. The rocky crust on Earth is virtually unexplored below the surface. The organisms we describe in this paper live in a completely different world than the one we know at the surface."

Subsurface bacteria are a controversial topic, as many scientists are skeptical of life-forms being completely disconnected from surface ecologies fed by the sun's light. It had been previously posited that subterranean microorganisms were recent arrivals, bound for extinction; rather than permanent fixtures. But Pratt and her co-researchers present evidence that the bacterial communities are indeed permanent -apparently millions of years old.

DNA analysis revealed the dominant species in the fracture were related to hydrothermal vent bacteria from the division Firmicutes. Further analysis suggests that the subsurface Firmicutes were removed from contact with their surface cousins anywhere from 3 million to 25 million years ago. The researchers don't speculate on how surface-related Firmicutes managed to colonize an area so deep within Earth's crust.

It could be said that Firmicutes serve the same function as photosynthetic organisms - such as plankton and trees - that capture sunlight for the ultimate benefit of other organisms. In the deep subsurface case, Firmicutes species are the producers, capturing the energy of radiation-borne hydrogen gas to support microbial communities.

Related Articles
It's Life Jim, But How Do We Know It?