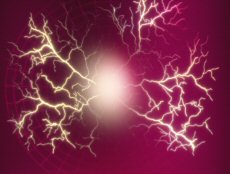 Proteins like to keep themselves busy, and one of the tasks they perform is the discharging of excess energy generated during metabolism. Usually, this is done by ferrying electrons to chemicals outside the cell, thus maintaining energy flow in the cell and keeping the cell alive. Now, scientists from the Department of Energy’s Pacific Northwest National Laboratory, have for the first time observed this electricity-shuttling process taking place without the cell. The purified proteins (from the outer membrane of the versatile, metal-altering soil bacterium Shewanella oneidensis) that did the electron-haulage could one day make highly-efficient miniature bioreactor cells feasible.

Biological fuel cells, or biofuel cells, are not yet powerful enough to be commercially viable but they offer the promise of breaking down sewage and other biological waste while generating electricity directly from the same process.

Writing in the Journal of the American Chemical Society, the scientists involved said the feat was the bacterial equivalent of removing the lungs from a mammal and coaxing the disembodied tissue to breathe. “We show that you can directly transfer electrons to a mineral using a purified protein, and I don’t think anyone had shown that before,” said researcher Thomas Squier.

To establish the dynamo-like properties of the proteins, Squier placed a dense coating of them on the iron-rich mineral hematite. The metal in hematite acts as an “acceptor,” or dumping point, for thousands-of-trillions of electrons per square centimeter shuttled by the protein-donor. This function in the protein is a relic of respiration, in which the cell depends on the protein to dump electrons to maintain a steady flow of energy and prevent a damaging accumulation of charge.

The researchers jump-started the process by supplying the protein with energy (either directly as electrons, or in the form of a natural cellular fuel called NADH) and then monitored charge-transfer from protein to mineral. “The peak current, or flux, doesn’t run long, just a few seconds,” Squier said, “but flux is at least as good as what you would find in the most efficient bioreactors, which rely on living bacteria.”