You are here: Home › News › Biochemists Mull Alternative DNA Structures
By Will Parker on October 4, 2006 in News 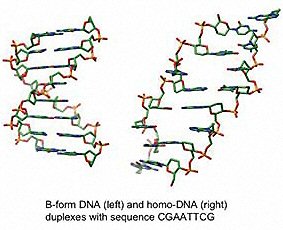 Scientists are trying to establish how nature arrived at DNA’s simple and elegant structure by putting together alternative DNA forms in the laboratory. “These molecules are the result of evolution. Somehow, they have been shaped and optimized for a particular purpose. For a chemist, it makes sense to analyze the origin of these molecules,” said Vanderbilt biochemist, Martin Egli, who has a burning desire to know why DNA is shaped the way it is.

Foremost among the questions he wants to answer is how DNA and RNA came to incorporate five-carbon sugars into their “backbone,” when six-carbon sugars – like glucose – may have been more common. Now, it seems Egli and his colleagues may have solved this riddle. Writing in the Journal of the American Chemical Society, Egli reports on the X-ray crystal structure of homo-DNA, an artificial type of DNA in which the usual five-carbon sugar has been replaced with a six-carbon sugar.

Swapping around the sugars that make up the DNA backbone allows researchers to create and test plausible alternatives to DNA – alternatives that nature may have tried out before arriving at the final structure. “If you can change the molecules chemically or functionally, you can see what is so particular about them, why are they optimal, why are they better than others,” Egli said.

Homo-DNA was first synthesized in 1992, but it’s only recently that a detailed picture of the molecule’s structure has started to emerge. While the homo-DNA structure shows a number of similarities with DNA, it is much more stable than DNA. However, it has a more haphazard appearance than normal DNA, looking more like a slowly writhing ribbon than the tightly twisted ladder.

Egli explained that homo-DNA has more flexibility in how the bases (the rungs of the ladder) bind. The bases in normal DNA adhere to a somewhat strict binding scheme – guanine (G) binds with cytosine (C) and adenine (A) binds with thymine (T). In this Watson-Crick base pairing, the G:C bonds are much stronger than A:T or any other bonds.

But in homo-DNA, the Watson-Crick base pairing rules are changed. “For example, G:C is similar to G:G or A:A, so you have a much more versatile pairing system in homo-DNA. Therefore, the nature of the sugar in the backbone affects the pairing rules,” Egli added.

But despite homo-DNA’s apparent versatility in base pairing and its superior thermodynamic stability, other features of its architecture probably preclude it from being a viable genetic system. For example, it cannot pair with other nucleic acids – unlike DNA and RNA which can, and must, pair with each other. Also the steep angle, or inclination, between the sugar backbone and the bases of homo-DNA requires that the pairing strands align strictly in an anti-parallel fashion – unlike DNA which can adopt a parallel orientation. Additionally, the irregular spaces between the rungs prevent homo-DNA from taking on the uniform structure DNA uses to store genetic information.

Egli’s findings suggest that fully hydroxylated six-carbon sugars probably would not have produced a stable base-pairing system capable of carrying genetic information as efficiently as DNA. “The structure now provides insight of a chemical nature that [the six-carbon sugar] is just too ‘bulky.’ It has too many atoms,” Egli said.

The new findings may have ruled out six-carbon sugars as viable alternatives for the sugar backbone of DNA but the existence of a multitude of sugars – as well as alternative bases – makes for an almost endless number of possibilities from which nature selected the winning DNA combination.

“Homo-DNA is just one alternative system. There are hundreds of sugars, as many as you can think of. It will be almost impossible to look at all of them,” Egli said. “But the big red herring of this work could be that nature never went through these other sugars. Maybe it just hit on gold [the five-carbon sugars] very early and took off from there.”