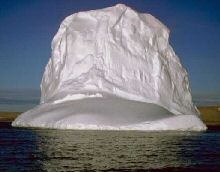 "This amount of Arctic sea ice reduction the past two consecutive winters has not taken place before during the 27 years satellite data has been available," said NASA researcher Joey Comiso. "In the past, sea ice reduction in winter was significantly lower per decade compared to summer sea ice retreat. What's remarkable is that we've witnessed sea ice reduction at six percent per year over just the last two winters."

The research team's findings, appearing in the journal Geophysical Research Letters, raise the possibility that Arctic sea ice will retreat to another record low extent this year.

This follows four summers of very low ice-cover, as observed by active and passive microwave instruments. "Recent changes in Arctic sea ice are rapid and dramatic," said NASA's Son Nghiem, who led the team. "If the seasonal ice in the East Arctic Ocean were to be removed by summer melt, a vast ice-free area would open up. Such an ice-free area would have profound impacts on the environment, as well as on marine transportation."

And the researchers say the problem isn't limited to the summer ice. Other research has shown a trend in which the melt period lasts about two weeks longer per year annually due to summer sea ice decline. This means that the onset of freeze-up is happening later in the fall season. As a result, the ice cover in winter never gets as extensive as it would have been if the freeze-up had begun earlier. More than that, the ice reflects the sun's radiation much more efficiently than the ocean's surface. As a result, as the ice cover declines, the ocean's surface warms, causing in turn, a further decline of the ice.

If the winter ice retreat continues, the effect could be very profound, especially for marine animals. "The seasonal ice regions in the Arctic are among the most biologically productive regions in the world," explained Comiso. "Some of the richest fisheries are found in the region, in part because of sea ice. Sea ice provides melt-water in spring that floats because of low density. This melt-water layer is considered by biologists as the ideal layer for phytoplankton growth because it does not sink, and there is plenty of sunlight reaching it to enable photosynthesis. Plankton are at the bottom of the food web. If their concentration goes down, animals at all tropics level would be deprived of a basic source of food."

Greenhouse gases are the most obvious culprit, but Comiso says other factors may also be at work. Data suggest that winds pushed perennial ice from the East to the West Arctic Ocean and moved ice through the Fram Strait, a deep passage between Greenland Norway. This movement of ice out of the Arctic is a different mechanism for ice shrinkage than the melting of Arctic sea ice, but it produces the same result - a reduction in the amount of perennial Arctic sea ice.

Nghiem conceded that his team did not yet have a clear picture of all the processes involved in the shrinkage and that continued observation would hopefully yield up some answers. "It's vital that we continue to closely monitor this region, using both satellite and surface-based data," he said.