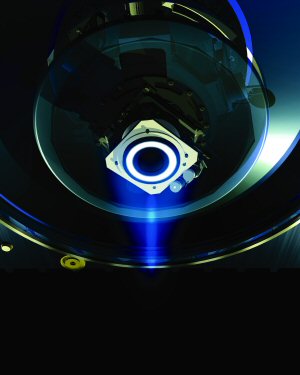 In the early hours of September 3, the European Space Agency’s SMART-1 spacecraft crashed into the lunar surface, the deliberate impact ending its momentous moon mapping mission. Launched in September 2003, and after an extended momentum-building trajectory around Earth, the Swedish built SMART-1 reached its destination orbit around the moon in November 2004. SMART-1’s moon orbit represented a successful end to a series of navigational, communications and engineering technology tests that will have a significant impact on future space missions. The most important of these tests was to observe how well a spacecraft using ion engines (solar electric propulsion – pictured) would handle complex gravity maneuvers, and negotiate orbit insertions around a celestial object.

“The long spiraling trajectory around Earth to test solar electric propulsion (a low-thrust approach), the long exposure to radiation, the strong perturbations of the gravity fields of the Earth-Moon system and then the reaching of a lunar orbit optimized for the scientific investigations, have allowed us to gain valuable expertise in navigation techniques for low-thrust propulsion and innovative operations concepts: telemetry distribution and alerting through the internet, and a high degree of ground operations automation – a remarkable benchmark for the future,” explained Octavio Camino-Ramos, SMART-1’s Operations Manager.

Other pioneering technologies used by SMART-1 included deep-space communication techniques, autonomous spacecraft navigation, and the advanced miniaturization of scientific instruments. “SMART-1 has been an enormous success from a technological point of view,” said Giuseppe Racca, SMART-1’s Project Manager. “It is a great satisfaction to see how well the mission achieved its technological objectives, and did great lunar science at the same time.”

SMART-1 began its scientific observations of the moon in March 2005. From an elliptical polar orbit that varied from roughly 500 to 3,000 kilometers, SMART-1 used visible, infrared and X-ray light to gather data on the moon’s morphology and mineral composition. “The legacy left by the huge wealth of SMART-1 data, to be analyzed in the months and years to come, is a precious contribution to lunar science at a time when the exploration of the Moon is once again getting the world’s interest” said Bernard Foing, SMART-1’s Project Scientist.

An extended mission time allowed ESA scientists to implement new data gathering techniques that included targeted observations, moon-spot pointing and ‘push-broom’ observations. “ESA’s decision to extend the SMART-1 scientific mission by a further year allowed the instrument scientists to extensively use a number of innovative observing modes at the Moon,” said Gerhard Schwehm, SMART-1’s Mission Manager. These innovative techniques not only allowed SMART-1 to return color images, but may also clarify theories about the moon’s origins. “SMART-1 has mapped large and small impact craters, studied the volcanic and tectonic processes that shaped the Moon, unveiled the mysterious poles, and investigated sites for future exploration. The measurements by SMART-1 call into question the theories concerning the Moon’s violent origin and evolution,” explained Foing.

With the moon attracting so much attention these days, SMART-1’s data is sure to be of interest to everyone – especially data concerning mineral compositions. “It seems that right now everyone in the world is planning on going to the Moon. Future scientific missions will greatly benefit from the technological and operational experience gained thanks to this small spacecraft, while the set of scientific data gathered by SMART-1 is already helping to update our current picture of the Moon,” said Professor David Southwood, ESA’s Director of Science.

Check out some animations of SMART-1’s impact with the moon.