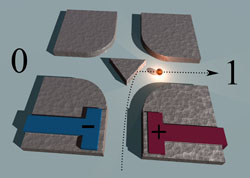 Computer engineers at the University of Rochester have thrown out the rulebook on transistor design and put together a prototype nano-scale transistor that is radically different from any other type of semiconductor. Christened the "Ballistic Deflection Transistor" (BDT), the new device works by bouncing individual electrons off deflectors, something akin to a game of billiards played at the atomic scale at unimaginable speeds.

Rochester's Quentin Diduck, who came up with the radical new design, believes the BDT is the next evolutionary step in semiconductor physics. "Everyone has been trying to make better transistors by modifying current designs, but what we really need is the next paradigm," said Diduck.

Driving the development of the BDT is the quest for more speed and better efficiency. While current transistor designs are still viable, the amount of heat they generate and the electrical "leaks" created by their size have already begun to limit their speed. Some other research groups around the world are working on BDT-like single-electron transistors, but these other designs still compute by starting and stopping the flow of electrons just like conventional transistor designs. The Ballistic Deflection Transistor differs significantly in this functionality, as it works by bouncing the electrons into their chosen trajectories - using inertia to redirect for "free," instead of wrestling the electrons into place with brute energy. This means the BDT produces far less heat and runs far faster than standard transistors.

The BDT resembles a roadway intersection, except in the middle of the intersection sits a triangular block. From the "south" an electron is fired, as it approaches the crossroads, it passes through an electrical field that pushes the electron slightly east or west. When the electron reaches the middle of the intersection, it "bounces" off one side of the triangle block and is deflected straight along either the east or west roads. In this way, if the electron current travels along the east road, it may be counted as a zero, and as a one if it travels down the west road.

Diduck says a chip using BDTs would use very little power, create very little heat, be highly resistant to "noise" inherent in electronic systems, and should be easy to manufacture with current technologies. And they would also be incredibly fast. All of which was good enough for the National Science Foundation to tip in over $1 million in funding to develop a prototype.

The team is now busy fabricating a prototype although much of the infrastructure needed to create the prototype will have to be built from scratch as well. "We're talking about a chip speed measured in terahertz, a thousand times faster than today's desktop transistors" Diduck said. "We have to figure out how to test it because there's no such thing as a terahertz oscilloscope!"