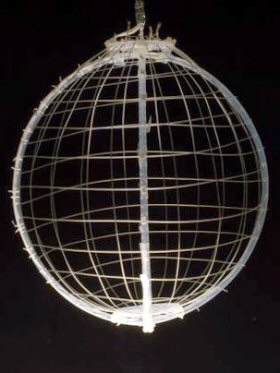 Throw away those cumbersome camera lenses, as MIT has just developed a new and amazing lightweight web fiber that can "see". The new light detecting material, featured in the journal Nature Materials, is expected to have a myriad of uses, from aiding the visually impaired, to outfitting soldiers on the battlefield. And maybe the technology could extend to chic urbane fashions, so you really could have eyes in the back of your head.

"When you're looking at something with your eyes, there's a particular direction you're looking in," explains MIT researcher Ayman Abouraddy. "The field of view is defined around that direction. Depending on the lens, you may be able to capture a certain field of view around that direction, but that's it. Until now, most every optical system was limited by an optical axis or direction."

Working in unison at their points of intersection, a spherical array of the 1-millimeter diameter fibers (consisting of a photoconductive glass core encased in a transparent polymer insulator) can pinpoint the exact source of incoming light anywhere along their length. Fink's team has also experimented with flat panel versions of the fibers that when placed in parallel to one another can generate crude computer images of backlit shapes and letters of the alphabet. The computer images are constructed from calculations based on the light intensity distributions detected by the fibers. Researchers suggest that the fibers could be woven into a textile, and a small CPU could provide information about a user's surrounds audibly or on a display screen (Spidey senses tingling!).

The technology could be improved and honed even further if the diameter of the fibers was reduced and the density of the web increased, but the team is more reserved when asked if the web will ever rival the human eye. "Just the idea of imaging with a transparent object is a true eye opener," said team leader, Professor Yoel Fink.

The new optical web system could enhance pre-existing technologies like space telescopes, and lead to a variety of new applications aimed at helping the visually impaired or providing a tactical advantage to soldiers on the battlefield. Researchers say that the transparent web fibers are even capable of interacting with giant computer screens, which could be activated with light beams rather than touch. "It's intriguing - the idea of touching with light. We could use light to enhance interaction with computers and even gaming systems," said Fink.

A web fiber equipped business suit comes highly recommended for those politicians and corporate execs wishing to avoid being stabbed in the back - where "et tu, brut?" becomes "I saw you coming."