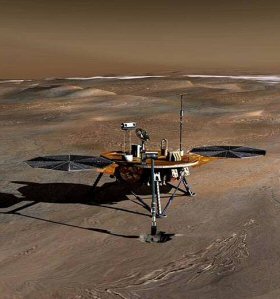 NASA’s next lander mission is set to gather samples from Mars’ surface and the frozen layer that lies beneath, and scientists are confident that this will provide new clues about whether life ever existed on the red planet. Soil scientist, Douglas R. Cobos, presented plans for this exciting new project at the recent 18th World Congress of Soil Science.

In the session “New Frontiers in Soil Science,” Cobos explained that by exposing Mars’ icy soil samples to the sun, scientists might be able to obtain vital data about the properties of the liquid water before it vaporized. Such a discovery could potentially lead to some explosive conclusions about life on Mars, and, according to Cobos, would represent a: “big finding and best case scenario for the Martian research community.” Cobos adds that this Martian liquid water is a pre-cursor for life, adding that it might point to: “life in a dormant state on Mars.”

Cobos’s employer, Decagon Devices, is working on a probe that will gather soil and atmospheric data during NASA’s Phoenix 2007 Scout Mission, which represents the first in a new line of smaller “Scout” missions in the agency’s Mars Exploration Program. Cobos has been working on the lander’s all important sensor arm for 2 years now, and is thrilled that NASA’s Jet Propulsion Lab have finally mounted and calibrated it to the lander. “It’s pretty exciting to actually have our sensor bolted to the arm of the lander.”

There were a number of difficult hurdles that the probe designers had to address in order to compensate for Mars’ alien environment. Cobos says in his paper that the physics on Mars means that ice transforms from solid to vapor almost immediately. “If we can measure this liquid water using our specialized sensor mounted on the robotic arm of the lander, we’ll be able to turn over the data to the planetary scientists to analyze the climate and conditions on Mars,” he explained.

Cobos hopes that the data collected during the mission will clear up long standing speculations and controversies about life on Mars, and whether the planet is capable of sustaining life in the future. “We’re waiting to see what’s up there. The best-case scenario would be to dig, probe around and finally have conclusive proof that there can be liquid water on Mars,” he said.

To try and address the “what ifs” before the lander begins work on Mars, teams of scientists are currently putting the robotic arm through a serious of rigorous tests while attached to a mock lander. The tests are carried out in a 2,500-square-foot area, called a Payload Interoperability Testbed (PIT), specially designed to simulate the Martian surface.

“The PIT is going to be a Martian stage set, the mission’s rehearsal theater,” said Phoenix mission leader, Peter H. Smith. “We’ll create an interesting scene for the science team to interact with. We’ll set up puzzles in the terrain we’ll dig into and have the science team solve the puzzles in paydirt. You won’t mistake this for Mars, but it will look Mars-like.” If all goes well, the Phoenix Lander is due for take off in late 2007, and will begin explorations in early 2008.