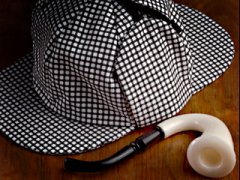 Scientists at Los Alamos have uncovered an intriguing quantum mechanical phenomenon while studying magnetic waves in barium copper silicate (a 2,500-year-old pigment known as Han purple). When newly grown crystals of the pigment were exposed to very high magnetic fields at very low temperatures; they entered a rarely observed state of matter. At the threshold of that matter state - known as a quantum critical point - the magnetic waves go from a three-dimensional to a two-dimensional pattern.

Detailing their work in Nature, the researchers describe how they discovered that at high magnetic fields (above 23 Tesla) and at temperatures between 1 and 3 degrees Kelvin, the magnetic waves in Han purple crystals "exist" in a unique state of matter called a Bose Einstein condensate (BEC). In this state, magnetic waves propagate simultaneously in all of three directions (up-down, forward-backward and left-right). But at the quantum critical point, the waves stop propagating in the up-down dimension, causing the magnetic ripples to exist in only two dimensions, much the same way as ripples are confined to the surface of a pond.

Los Alamos physicist Neil Harrison said that the reduced dimensionality was a complete surprise. Harrison and the other team members believe that the lost dimension phenomenon is caused by the strange nature of atomic behavior in quantum states. In the higher temperatures of the BEC state, the individual waves - which are associated with magnetism from pairs of copper atoms in the Han Purple pigment - lose their identities and condense into one giant wave of undulating magnetism. As the temperature is lowered, this magnetic wave becomes more sensitive to the vertical arrangement of individual copper layers in the pigment - which are shifted relative to each other - in a phenomenon called "geometrical frustration". This makes it difficult for the magnetic waves to propagate in the third up-down dimension, which leads to its two-dimensionality.