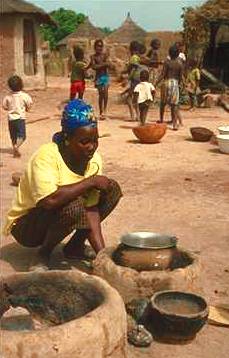 Cassava (Manihot esculenta) is the primary food source for more than 250 million Africans - about 40 percent of the continent's population. And the plant's starchy tuberous root is an important foodstuff for nearly 600 million people worldwide. Sayre said he hopes to offer these plants to countries where cassava is an significant part of the diet.

Sayre used a variety of cassava native to Colombia in which he inserted an E. coli gene that controls starch production. "Cassava actually has this same gene," he explained, "but the bacterial version of the gene is about a hundred times more active." Consequently, the modified plants converted more of their sugar into starch, as shown by an increase in root size as well as the number of roots and leaves produced by each modified plant.

Interestingly, Sayre said that the bigger roots produced by the plants were just that - bigger. They weren't necessarily more nutritious. But Sayre is also involved in another project focused on improving the nutritional content of cassava. In this work Sayre leads an international team of scientists focused on increasing the vitamin, mineral and protein content of the plant.