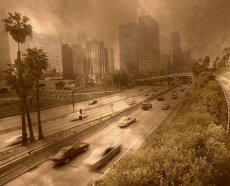 Researchers at the Lawrence Berkeley National Laboratory and the University of California believe they can quantify the effects of climate feedback-loops using past increases in natural carbon dioxide and methane gas levels as a guide. Worryingly, their results point to global temperatures at the end of this century that may be significantly higher than current climate models are predicting.

Researchers Margaret Torn and John Harte, whose paper appears in the journal Geophysical Research Letters, used ice cores to estimate the amounts of carbon dioxide and methane (two of the principal greenhouse gases) that were released into the atmosphere in response to past global warming trends. Combining their estimates with standard climate model assumptions, they calculated how much these rising levels caused global temperatures to climb, further increasing carbon dioxide and methane emissions, and so on.

Torn and Harte suggest that the current climate change models, which are predicting a global temperature increase of as much as 5.8 degrees Celsius by the end of the century, may be off by nearly 2.0 degrees Celsius because they only take into consideration the increased greenhouse gas concentrations that result from human activities.

Current climate projections do not take into account additional amounts of carbon dioxide and methane released when rising temperatures trigger ecological and chemical responses, such as warmer oceans giving off more carbon dioxide, or warmer soils decomposing faster, liberating ever increasing amounts of carbon dioxide and methane. This inability to quantify the impact of Nature's responses in the face of overwhelming human input is the chief weakness of current models, according to Torn and Harte, who believe they are able to provide this critical information by examining the paleo-climate data stored in the ice cores. "Paleo data can provide us with an estimate of the greenhouse gas increases that are a natural consequence of global warming," said Torn. "In the absence of human activity, these greenhouse gas increases are the dominant feedback mechanism."

The data recorded in the Vostok ice core revealed that large rises in temperatures are more the result of strong upsurges in atmospheric carbon dioxide and methane concentrations set-off by initial warming. "Our results reinforce the fact that every bit of greenhouse gas we put into the atmosphere now is committing us to higher global temperatures in the future and we are already near the highest temperatures of the past 700,000 years," Torn said. "At this point, mitigation of greenhouse gas emissions is absolutely critical."

Interestingly, the authors say that the feedback loop from greenhouse gas concentrations also has a reverse effect, in that reduced atmospheric levels can enhance the cooling of global temperatures. But Harte is not overly optimistic. "If we reduce emissions so much that the atmospheric concentration of carbon dioxide actually starts to come down and the global temperature also starts to decrease, then the feedback would work for us and speed the recovery," he explained. "However, if we reduce emissions by an amount that greatly reduces the rate at which the carbon dioxide level in the atmosphere increases, but don't cut emissions back to the point where the carbon dioxide level actually decreases, then the positive feedback still works against us."