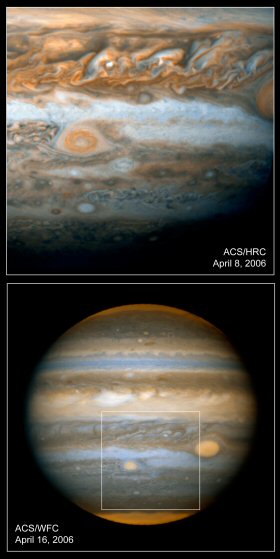 The Hubble Space Telescope is giving astronomers a detailed view of the birth of a second red spot on Jupiter. This is the first time that astronomers have witnessed the birth of a new red spot – really a massive atmospheric storm – on the giant planet, which is located half a billion miles away. The new storm is about one-half the diameter of its bigger sibling, the Great Red Spot. The astronomers involved speculate that the new spot (approximately the size of Earth) may be related to possible significant climate change affecting Jupiter.

Dubbed Red Spot Junior, the Hubble Telescope’s new images provide a level of detail comparable to that achieved by NASA’s Voyager 1 and 2 spacecraft as they flew by Jupiter a quarter of a century ago.

Initially, the new storm appeared as a white area, which was known as White Oval BA.

It formed after three white oval-shaped storms merged during 1998 to 2000. Astronomers say that the progenitor white ovals can be traced back to 90 years ago, and may have been present even earlier. But it was only recently that White Oval BA changed to the distinctive red color, believed to be caused by material being dredged from deeper in Jupiter’s atmosphere, which is then chemically altered by the Sun’s ultraviolet light. Astronomers think that the storm may rise many miles above the top of the main cloud deck on Jupiter, just as its larger cousin is thought to do.

Some scientists believe the new spot might indicate that Jupiter is in the midst of a global climate change that will alter its average temperature at some latitudes by as much as 10 degrees Fahrenheit. The transfer of heat from the equator to the planet’s south pole is predicted to nearly shut off at 34 degrees southern latitude, the latitude where the second red spot is forming.