You are here: Home › News › Human Activity Driving Changes In Atmospheric Circulation
By Will Parker on May 5, 2006 in News

While there is widespread agreement that human activities are warming the climate, there has been little consensus on the effect this warming may have on the large scale atmospheric dynamics that shape the Earth’s climate. Now, a new study has found that the principal loop of winds – known as the Walker circulation – that drives climate and ocean behavior across the tropical Pacific is slowing down and causing the climate to drift towards a more El Niño-like state. The Walker circulation spans almost half the circumference of the Earth and affects weather patterns globally.

“The Walker circulation is fundamental to climate throughout the globe: its variations are closely linked to those of the El Niño/Southern Oscillation and monsoonal circulations over adjacent continents, and variations in its intensity and structure affect climate all over the globe,” explained Dr. Gabriel A. Vecchi, lead author of the study.

Vecchi, from the National Oceanic & Atmospheric Administration, said that the research team had identified a 3.5 percent weakening in the Walker circulation that has occurred since the mid-1800s. They also cite evidence that it may weaken another 10 percent by 2100. “There is an indication that the slowdown may be intensifying. The trend since World War II is larger than that over the entire record, and the long-term trend is larger than what is expected from natural climate variability,” Vechi added. 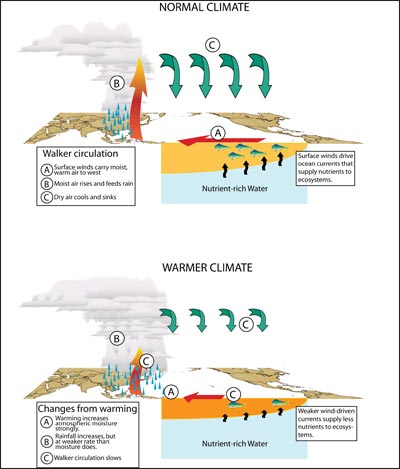 Co-researcher Dr. Brian Soden said the study sends mixed signals on the future of weather events like El Niño and La Niña. “While we can’t predict with certainty how the frequency or intensity of El Niño-related weather events will respond to global warming, our study does suggest that the climate as a whole is slowly moving towards a more El Niño-like state,” Soden explained. “Additionally, this slowdown has modified the structure and circulation of the tropical Pacific Ocean, which is a source of nutrients to one of the most biologically productive regions of the world’s oceans. This has implications to the well-being and proliferation of marine life in tropical oceans.”

Back to the drawing board for North Atlantic circulation