You are here: Home › News › Volcano Study Suggests Bronze Age History Needs Rewrite
By Will Parker on May 1, 2006 in News 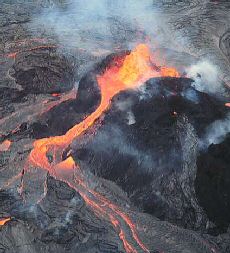 After examining tree rings and seeds, researchers now believe that the Santorini volcanic eruption – an important historical marker – occurred in the late 17th century B.C., and not 100 years later as records currently show (oops!). This development may have important implications for histories that claim that the seafaring Minoans of Crete, the mercantile Canaanites of northern Egypt and the Levants never had trade relations, as they were separated by 100 years.

The exact date of the eruption has never been known, yet scientists have used Santorini, one of the largest eruptions in history, as an important archaeological signpost. Taking this into consideration it’s easy to see how the discrepancy arose, as scientists used the eruption to link Aegean styles in trade goods found in Egypt and the Near East to Egyptian inscriptions and records. “Santorini is the Pompeii of the prehistoric Aegean, a time capsule and a marker horizon,” said Manning. “If you could date it, then you could define a whole century of archaeological work and stitch together an absolute timeline.”

While previous guesstimates placed the volcanic event around 1500 B.C., Manning found that the Santorini eruption actually occurred in or around the period 1660 to 1613 B.C. “At the moment, the radiocarbon method is the only direct way of dating the eruption and the associated archaeology,” said Manning.

The solution, Manning suggests, is that Aegean and Egyptian chronologies for the period 1700-1400 B.C. be realigned. Manning sees a number of weak links in the chronology, and views the new radiocarbon data as grounds for “a critical rethinking of hypotheses that have stood for nearly a century in the mid second millennium B.C.”

The chronologies of the Aegean and Near Eastern cultures have been a crucial anchor point in regard to Greek and European history, so any alteration will have a significant flow-on effect. In short, the “realignment” means that Aegean chronology will be extended by 100 years, and reveal alliances and cultural influences that have until now seemed highly improbable.