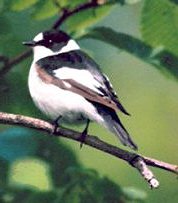 What ornithologists previously considered to be a male bird's decorative plumage, has instead been found to have a far deeper significance in the case of the Collared Flycatcher (Ficedula albicollis) bird. Female birds were known to pick their mate based on the size of a spot on the male's forehead, but instead of merely being decorative, the size of the spot also indicates the health of the male bird's immune system. The researchers behind the finding, from Uppsala University in Sweden, believe their discovery helps explain the long-standing question of why individuals of a species are attracted to seemingly superfluous characteristics of potential mates.

While the fanned tail of a male peacock or the stripes of the female gulf pipefish make for a beautiful spectacle, evolutionary biologists have long struggled to explain why such seemingly evolutionary redundant attributes should sway the decision of a mate. It's well known that males and females of various species favor mates that can put on the best show of dance, song or color, which are known as secondary sexual characteristics, but until now these features seemed to be an end unto themselves. Convinced that there must be more to the range of diversity within a single species, biologists are now increasingly looking at the role that genetics might play in secondary sexual characteristics.

One school of thought claims that particular decorations associated with a species are more vibrant and clear on individuals that are healthiest, and that the quality of the adornment is heritable. But why does the quality of these traits vary within the same species, and why didn't evolution select a standard appearance and constitution for all? Evolutionary biologists point to the changing environmental factors that species' immune systems are constantly adapting to. "More and more evidence indicates that the most changeable part of the environment consists of parasites, bacteria and viruses. All of these - especially viruses - evolve more rapidly than the hosts whose resources they live off of. The host will therefore always be in an important evolutionary race against its diseases," explains M�ns Andersson, who directed the research team.

The team adds that the male collared flycatcher can even change the size of its forehead spot during mating season, with those males capable of the greatest unfurling of their spots also producing the most antibodies. Interestingly, the team also found that offspring born from human selected pairings are not as healthy as those within a species who chose their own mates. "Thus it seems that the female uses the forehead spot as a health indicator. When she chooses males with a large forehead spot, she takes not only the healthiest males, but also the ones with the best immune defense against future virus infections."