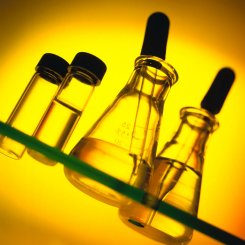 One of the problems in molecular synthesis is that there simply "aren't enough atoms in the universe to make all the reasonable-sized molecules that could be made," explains Duke University chemistry professor David Beratan. To help sift through this giant haystack, he's investigating a new computer method that could help scientists identify the best molecules for drugs, electronic devices or any number of other uses.

To help sort through the vast number of molecules that are possible, Beratan and co-researcher Weitao Yang have proposed a computer assisted way to identify molecules that may have sought after properties. Their technique - which they hope to patent - focuses on a certain universal property of molecules called a "linear combination of atomic potentials" (LCAP), which is applicable to all molecules.

Beratan explains that LCAP accounts for energy relationships between electrons and associated nuclei in the atoms making up all possible molecules. Using LCAP would enable targeted searches for the best molecules exhibiting various key chemical or physical properties. Those searches would quickly sort through all the possible molecular building blocks assembled within a computer calculated "space" containing the multitude of possible molecules.

Optimal candidates for a given use would emerge through a computed process of accepting or rejecting various building block combinations. He adds that LCAP could be used "as a scheme to build up libraries of chemical potential functions that can be 'snapped together' to build the analytically exact electron-nuclear attraction potential for a whole molecule to put together from the chemical groups."

The mathematics of this process, explained in the Journal of the American Chemical Society, can be envisioned graphically as bringing order to a huge jumbled surface that represents the properties of all possible molecules. On the more-ordered landscape their calculations allow the best choices to extend above the rest, like the computer equivalent of the perfectly symmetrical Mt. Fuji. "So for one such application, the 'peak' might be the perfect drug from the standpoint of binding to a protein," Beratan explained. "Down in the 'basin' would be other molecules that are average to poor from the standpoint of that application. And for each application there would be a different Mt. Fuji at a different location in this space," he added.

Beratan illustrated the benefits of the new approach by explaining how present-day molecular discovery processes that identify new molecules by making small structural changes to previous ones can get "lost" in the huge universe of molecular possibilities. "For instance, all the current molecules related to aspirin may be in one place, while all the Tylenol-like molecules are in a separate cluster," he said. "Meanwhile, maybe the best possible drug of that type may be undiscovered somewhere else with a chemistry that's quantitatively different from known molecules."