You are here: Home › News › New And Improved Insta-Nanotube!
By Will Parker on March 1, 2006 in News 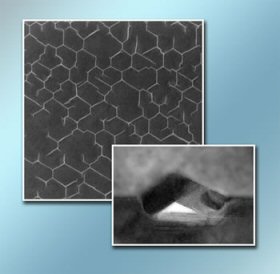 Nanotubes are touted as useful for a range of applications – such as nanoelectronics and optics – but in order to be practical they have to be connectable. And while your local plumber may be able to connect water pipes in her sleep, joining nanotubes together into complex networks has so far proved to be extremely challenging. Now a paper entitled “Self-Assembled Nanofold Network Formation on Layered Crystal Surfaces During Metal Intercalation,” to be published in the March 3, 2006 issue of Physical Review Letters, may at last herald the arrival of the nanoscale-plumber.

Previous attempts at linking nanotubes have involved using cylinders with a structure matching one or more rolled up sheets of a layered crystal such as graphite. But this method looks to be past its use-by-date if a new technique discovered by researchers at the Lawrence Berkeley National Laboratory’s National Center for Electron Microscopy (NCEM) and the Christian Albrechts University of Kiel in Germany, is shown to work.

Team leader Erdmann Spiecker, of Berkeley Lab, explains that their nanotubes are prismatic folds that miraculously take shape on the surface of a layered crystal. Spiecker first noticed the intriguing phenomenon when working with another group headed by Wolfgang J�ger, in Kiel. The researchers observed that when they deposited metal atoms on the surfaces of layered crystals of titanium telluride and vanadium selenide, it activated extensive, complex hexagonal networks of tubes that took shape in under a second. “Originally it was thought the structures were cracks, like cracks in the mud of a dry lake bed, which filled up with the condensed metal to form nanowires,” Spiecker explained. “[But] we started to question this idea when we failed to find evidence of condensed metal anywhere in the samples.”

Still unsure of their observations, the team mulled over other possible models that could explain the behavior of the molecules, but to no avail. Short of a feasible explanation, Spiecker attracted the support of the U.S. Department of Energy and the German Science Foundation, who gave them the green light to further investigate the phenomenon at Berkeley Lab’s NCEM. “We have many unique resources here – including a focused ion beam facility, a custom-built low-energy electron microscope, and several high-resolution microscopes – but they often tend to follow their own program tracks. To [Spiecker] these boundaries didn’t exist. He brought the equipment and the skills together to solve an unusual scientific problem,” said NCEM’s director Ulrich Dahmen.

When the team gazed right through the vanadium selenide crystals, a feat made possible using transmission electron microscopy (TEM), they observed distinctive moiré patterns. Moiré patterns arise when two separate grids are layered on top of one another while slightly askew and unaligned. It was these moiré patterns that alerted the team to the altered spacings between atoms in the crystalline layers near the surface of the material, and the real nature of the networks that they were observing. Vanadium selenide shares a similar characteristic to that of carbon atoms in graphite: both have tightly bonded atoms along the plane, but very weak bonds between layers. But unlike carbon, vanadium’s two different molecules can give rise to different lattice geometries within each layer.

In order to reveal what was going on in-between the vanadium sheets, Spiecker turned to another of NCEM’s high-tech detectors: The low-energy electron microscope (LEEM). “The LEEM is made to study surfaces, using a beam with an energy of a few electron volts, which penetrates only a few layers,” explains NCEM’s Andreas Schmid. “Our LEEM has an ultra-high-vacuum sample chamber, orders of magnitude better than most other electron microscopes, so contaminating molecules don’t affect the sample’s surface.”

Using the LEEM’s high-vacuum chamber, Spiecker’s team sliced a vanadium selenide crystal to expose a flat, sleek surface. The team then videotaped an area of the surface, measuring the diameter of a red blood cell, at one frame per second while they gradually rained vaporous copper atoms onto the surface. Thirteen minutes passed without a reaction, but then a network rapidly formed in-between frames. With this observation under their belts, the team then sliced the sample sideways so that they could use a focused ion beam (FIB) to examine the network elements from the side. For greater accuracy, and to prevent the possibility of distortion, NCEM’s Andrew Minor tweaked the standard FIB procedure to arrive at what he called a “shadow FIB” method. “Instead of applying a protective layer of platinum, which would have ruined what we wanted to look at, we preserved the surface layers intact by using the ion beam to shave away unwanted material from the back of the sample,” said Minor.

Using high-resolution TEM, the team finally revealed that the network was comprised of hollow nanofolds in the surface layers that had been pushed together to form their now distinctive roof-like structures. The high-resolution TEM also mapped out the nanofold network and pinpointed the positions of the copper atoms residing beneath the surface. The team found that the copper atoms had somehow ended up wedged between the uppermost layers to form what’s known as an intercalation compound. “We believe we are observing a chemical reaction, involving a phase change in the lattice structure of the surface layers,” Spiecker said. “Kinetic energy is much too small for the metal atoms to penetrate into the crystal.”

It appears, then, that the change in a layer’s structure is caused by the accumulation of the copper atoms’ compressive stress. When this reaches a critical point, the layer surface is pushed to the side in all directions. It is at this point that the layer breaks away to glide over the bottom layers and form a hexagonal network.

Spiecker cautions that while they have unraveled one of nanotech’s mysteries, there remain many unanswered questions, such as the speed of network formation. “By adjusting the video frame rate we may be able to detect the interval between no network and a fully formed network with one-tenth of a second time-resolution, but we can’t resolve the dynamics on the microsecond scale,” lamented Spiecker. “We’ll have to come up with new methods to do that.” It appears that the next big challenge is to develop a video device fast enough to capture this mysterious nanoscale event.

Spiecker also wants to explore the triggers and the intensity of the stresses that are suddenly imposed upon the layers during the reaction, and how these layers compensate for these stresses in regard to their relative positions.

Surface nanotube networks such as these could one day be used for networks of pipes for the storage and transport of minute quantities of materials, or templates for the fabrication of nanowire networks. “There are many exciting follow-ups to investigate in these systems,” said Dahmen, “ranging from whether and how the tubes can be filled with liquids or with metal atoms to form wires, to controlling the sizes and patterns of the networks, to understanding the atomic structure of their junctions.”