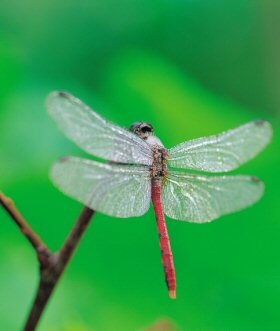 If human engineers had designed the dragonfly’s method for flight they’d likely be inordinately proud. The dragonfly has four wings at its disposal and employs an unusual but effective pitching stroke that allows it to hover and move backwards with precision. In her seminar on flying systems and fluid dynamics presented at an American Association for the Advancement of Science meeting, Z. Jane Wang, professor of theoretical and applied mechanics at Cornell, explained: “Dragonflies have a very odd stroke.

It’s an up-and-down stroke instead of a back-and-forth stroke. Dragonflies are one of the most maneuverable insects, so if they’re doing that they’re probably doing it for a reason.”

Wang reinforces the notion of science and engineering taking nature’s lead by considering how structures such as paper fall through fluid environments like air. “The way paper or leaves fall, and how insects fly, may give us some ideas about why animals use these methods at all,” she said. From these initial observations, Wang then considers how insects take advantage of these fluid environments as economically as possible to stay airborne. “The major question I focus on is the question of efficiency,” she said. “It’s the long-standing question: Of birds and planes, which is better? And if we think planes are better – why?”

One of the main reasons why scientists consider airplanes (airfoils) to be more efficient is because they travel from A to B without any up-and-down motion of the sort usually associated with animals in nature. “But there are infinitely many ways you can go up and down,” said Wang. “Of all these paths, are any better than a straight line? Some are – that’s what I found.”

The odd finding that alerted Wang to reconsider current concepts of flight efficiency is that dragonflies push downward to get their lift. “An airfoil uses aerodynamic lift to carry its weight. But the dragonfly uses a lot of aerodynamic drag to carry its weight. That is weird, because with airplanes you always think about minimizing drag. You never think about using drag,” Wang explained.

Armed with this new knowledge, Wang ponders whether engineers could build flapping airplanes that are as efficient as fixed-wing aircraft. “To hover well or to fly for a long time is hard, especially at slow speeds,” she said. “Power is limited. So finding these efficient motions is very important.”

To aid the development of new types of aircraft, Wang is considering designing computer models of movements found in nature. But Wang is not limiting her studies to insects, and aims to examine why many creatures move the way that they do through fluid environments. “I want to build insects on a computer as a way of learning why almost all things that move in fluid use a flapping motion,” said Wang. “Whether it’s a fish which flips its fins or a bird, they’re actually using the same principle.”