You are here: Home › News › Metals Shortage Looming
By Will Parker on January 26, 2006 in News 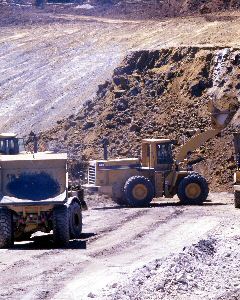 A new study by Yale researchers into the supply and usage of copper, zinc and other metals has determined that supplies of these resources – even if recycled – may fail to meet the needs of the global population. The researchers say that even the full extraction of metals from the Earth’s crust and extensive recycling programs may not meet future demand if all countries try and attain the same standard of living enjoyed in developed nations.

Yale researchers, Robert Gordon and Thomas Graedel, based their study on metal still in the Earth, in use by people and lost in landfills. Using copper stocks in North America as a starting point, the researchers tracked the evolution of copper mining, use and loss during the 20th century. The researchers then applied their findings and additional data to an estimate of global demand for copper and other metals if all nations were fully developed and used modern technologies.

The study, appearing in the Proceedings of the National Academy of Sciences, found that all of the copper in ore, plus all of the copper currently in use, would be required to bring the world to the level of the developed nations for power transmission, construction and other services and products that depend on copper.

Globally, the researchers estimate that 26 percent of extractable copper in the Earth’s crust is now lost in non-recycled wastes; while lost zinc is estimated at 19 percent. Interestingly, the researchers said that current prices do not reflect those losses because supplies are still large enough to meet demand, and new methods have helped mines produce material more efficiently.

While copper and zinc are not at risk of depletion in the immediate future, the researchers believe scarce metals – such as platinum – risk depletion in this century because there is no suitable substitute for use in devices such as catalytic converters and hydrogen fuel cells. And because the rate of use for metals continues to rise, even the more plentiful metals may face similar depletion risks in the not too distant future.

“There is a direct relation between requisite stock, standard of living and technology in use at a given time,” said Gordon. Studying the metal lifecycle from cradle to grave, “provides a different approach to studying use of finite resources – one that is more directly related to environmental concerns than are the discussions found in the economics literature,” he concluded.