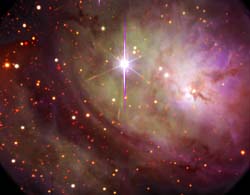 While the good Professor acknowledges that crayfish (Cherax destructor) are not known for their large brains, his research, published in the current issue of the Journal of Experimental Biology, found that crayfish have extremely well designed detectors for mapping out their environment. "We're trying to find out how crustaceans work out what their world is like," says Macmillan.

Rather than just aimlessly wandering about and avoiding predators by sheer chance, crayfish use an acute sense of touch that provides a detailed mental image of their surroundings, says Macmillan. "People have made lots of assumptions that they're not that smart and they don't know what's going on out there but increasingly [we're] finding that they actually put together some pretty sophisticated pictures," he said.

Anyone who has reeled out of bed in the middle of the night, groping the walls in search of the bathroom, can probably relate to the way that crayfish use their antennae to navigate the murky depths. They also use chemosensory receptors all over their bodies that allow them to detect chemicals in the water and identify food, mates or predators. These are the sorts of capabilities that initially intrigued NASA scientists, who have applied Macmillan's earlier work on crayfish toward developing tiny space exploration robots.

To determine just how sensitive crayfish sensors really are, Macmillan and his team placed the crayfish into pens containing different types of surfaces and structures. The crayfish distinguished between materials such as bubble wrap and sandpaper, Macmillan explained: "What we're seeing is that they change their behavior according to the texture of surfaces."

Macmillan's research significantly contributes to the field of biomimetics, where designs found in nature are used in robotics and other technologies. He has met with NASA scientists who believe that the humble crustacean could offer new insights into how to design autonomous exploration robots and Macmillan is excited by the possibilities, saying that further research may yield even more tantalizing possibilities. "We now think we've got evidence that they can do very sophisticated analyses on a space before they even get into it, they can detect vibrations and they can remember what they've experienced before," he explained.