You are here: Home › News › Evolution Makes A Mockery Of Fishing Policy
By Will Parker on February 20, 2006 in News 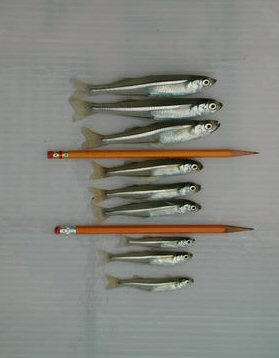 The fishing mantra of harvesting the largest individuals from a fish population introduces genetic changes that harm the overall fish population, a new University of California study has found. The researchers say that removing the large fish over several generations causes the remaining fish in the population to become progressively smaller, have fewer and smaller eggs with lower survival and growth, and have lower feeding rates.

According to study leader Matthew R. Walsh, the study was the first to simulate the evolutionary impacts of harvesting in a laboratory setting. “We have shown for the first time that many traits correlated with fish body-size may be evolving in response to intense fishing pressure,” he explained.

The study, appearing in the journal Ecology Letters, focused on the Atlantic silverside, a commercially harvested fish found along the east coast of North America. The researchers conducted harvesting experiments over five generations, selecting out the largest individuals from each generation and evaluating multiple traits, such as body size and the number of eggs.

Walsh said that removing the large fish in each generation caused declines in many traits spanning the life history, physiology and behavior of the fish. “We know that commercially exploited populations of fish often are slow to recover when fishing pressure is reduced. Our research indicates that the over-harvested fish stocks are slow to rebound because fishing selects for evolutionary changes in the life history of the fish. Because the changes in the fish are genetic, they don’t immediately go away when fishing ceases,” he concluded.