You are here: Home › News › Astronomers Discover Gigantic X-Ray Tunnel
By Will Parker on January 16, 2006 in News 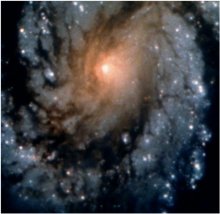 A team of astronomers using the Chandra X-ray Observatory say they have discovered a giant Milky Way-sized tunnel filled with high-energy particles in a distant galaxy cluster. The tunnel may represent the link needed to understand the life cycle of so-called radio jets spawned from voracious super-massive black holes.

Since its launch from the space shuttle Columbia in 1999, the Chandra X-ray Observatory – a powerful x-ray telescope – has made a substantial contribution to cosmology. Not only can the telescope inform astronomers of the distribution of matter in a galaxy, but also the properties of dark, exotic and non-baryonic matter. By using Chandra to study the multi-million degree gas in a galaxy cluster named Abell 2597, roughly one billion light years away, scientists have discovered an unusual X-ray tunnel, believed to be 200 million years old and large enough to house the entire Milky Way galaxy. For those not familiar with the dimensions of the Milky Way, that’s 110,000 light years by 36,000 light years in size.

The new observations update old models, as past radio observations at a wavelength of roughly 4 cm, published in 1995 by Craig Sarazin and collaborators, showed that this system was host to a small radio galaxy only 25 thousand light years across. The new observations of the tunnel in Abell 2597 are critical to astronomers, because they provide additional clues as to how a war of attrition is waged between an inward flow of hot gas and an outward burst of powerful radio jets (strong, variable radio emissions).

Delivering the updated findings at the American Astronomical Society meeting in Washington, Dr. Sarazin explained that: “X-ray and radio observations show that the central super-massive black holes in clusters are at war with the surrounding X-ray gas.” Sarazin added that: “In Abell 2597, the small young radio source being inflated by the super-massive black hole at the center of this cluster is the start of a new battle. The tunnel is like a scar left from previous battles, showing that this war has been going on for billions of years. The fact that the tunnel connects back to the super-massive black hole suggests that the black hole is trying to breach the cluster of defenses in the same area of the gas where it has been successful in the past.”

The cycle involves hot gas invading the core of the cluster and feeding the super-massive black hole lurking there. As the black hole sucks up all in its wake, it becomes active and nearby material is funneled into powerful jets of highly energetic particles spewed outward into the hot gas. These relativistic jets, containing particles moving at close to the speed of light, carve out bubbles while they expand, pushing aside the hot gas. This process is short lived, however, as the jets eventually cut off the fuel supply to the central black hole, leading to a temporary starvation. Without fuel to maintain the attack, the radio jets cease and the hot gas once again is able to invade the central region of the cluster and the battle begins again.

Team member Dr. Tracy Clarke, explained at the meeting that she obtained new low frequency (90 cm wavelength) radio observations using the National Science Foundation’s Very Large Array (VLA). She added that this was to eventually shed new light on the violent history of the central radio galaxy and its connection to the X-ray tunnel. “Low frequency radio observations are sensitive to the oldest energetic particles, thus giving us a means to step even further back in time and look into the past lives of radio galaxies,” explains Dr. Clarke. These new observations revealed that the X-ray tunnel is filled with old particles, invisible at shorter wavelengths, which likely originate from the past outbursts of the black hole.

Despite the significance of these recent breakthroughs, astronomers are far from understanding the complex interactions between radio jets and the hot gas in galaxy clusters. Further progress in the field will require sensitive observations at even longer wavelengths, but unfortunately the current suite of low frequency radio telescopes are already at their limits of sensitivity and resolution. As you would expect, a collective of astronomers known as the Southwest Consortium have already begun work on a next generation low frequency telescope, called the Long Wavelength Array (LWA). The telescope will operate at wavelengths that have the potential to revolutionize future studies of radio galaxies and galaxy clusters.