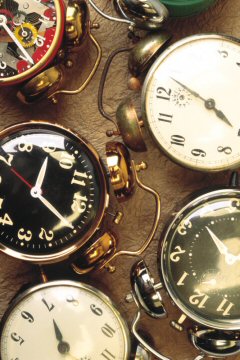 Our biological timekeeper - known as the circadian clock - runs to a 24-hour rhythm that regulates metabolism, cell division, and hormone production, as well as our wake-sleep cycle. Until now, scientists believed they had a fairly good grasp of how the circadian clock functioned, but a new study, published in Science, looks set to turn the old model on its head.

The scientists involved, from Rockefeller University, discovered a previously unknown six-hour clock within the 24-hour circadian clock, using an obscure imaging technique called fluorescence resonance energy transfer (FRET). FRET gauges interactions between proteins by fluorescently tagging them and measuring how they react to different wavelengths of light. The technique is so complicated that scientists rarely use it, but it did allow the Rockefeller researchers to follow proteins in a single cell for an extended period of time, letting them follow circadian proteins as the "clock" ticked away in a living cell.

It was previously established that another gene, known as "Timeless", acts in conjunction with Period in a negative feedback loop that takes about 24 hours to complete. At night, two other genes ("Clock" and "Cycle") stimulate production of Period and Timeless proteins, which begin to accumulate in the cell's cytoplasm. After about six hours, the two proteins move into the nucleus; their presence turns off the genes, which then remain inactive until Period and Timeless degrade and the whole cycle begins anew.

Earlier studies, which examined the placement of Period and Timeless during different stages of the cycle, seemed to indicate that the two proteins idle in a cell's cytoplasm until they "bump" into each other and then, bound together, enter the nucleus. But observations using FRET showed that this scenario was far too simple.

Young explained that FRET allowed direct observation of the biochemical interactions undertaken by Period and Timeless inside the cell. "No one had ever labeled the components to follow them over time, to see one clock as it ticks away in a single cell. All the biochemistry and molecular biology that had been done on this had been piecing together information from dead flies."

FRET allowed Young and co-researcher Pablo Meyer to follow the interactions between Period and Timeless with a resolution never before possible. They discovered that, rather than randomly colliding; the two proteins bind together in the cytoplasm almost immediately and create what Young and Meyer refer to as an "interval timer." Then, six hours after coming together, the complexes rapidly break apart and the proteins move into the nucleus singly, all of them within minutes of each other. "Some switch is thrown at six hours that lets the complex explode. The proteins pop apart and roll into the nucleus," Young explained. "Somehow, implanted within the system is a timer, formed by Period and Timeless, that counts off six hours. You have a clock within a clock."

Young and Meyer have yet to figure out exactly how the timer works, but its discovery opens up the door to a whole new suite of questions. "How does this interval timer tick? Is it made from additional proteins? Is this the only such timer in the circadian clock? Each of these questions are ahead of us," Young said. "A couple of years ago, we had identified lots of genes and had this sweeping picture of how circadian clocks work. But this indicates that there are much more formidable properties of the system that were overlooked."